Home Blog Breman - A Rebel About To Turn 50

Over recent years we have travelled the world searching for progressive organizations, and inspiration on how to make work more fun. Sometimes, we find inspiration closer to home. Breman is such an example.

Breman is a family business, with ~1,700 employees and operating in the technical installation sector. Which means employees spend most of their time in factories or on building sites. They operate via a unique organization model.

To learn more about their model, we visited one of their manufacturing sites in Holland. There, we meet several employees—including René Breman, Albert de Wilde and Richard van der Wal. With them, we toured the factory, and talked about their unique organization.

Breman has used a unique organization and governance model (which they call the ‘Breman System’) since the early 1970’s. It is designed so that employees have just as much say over company assets as shareholders. And profits are shared between both groups.

Their ‘System’ achieved international fame in its early days – via a Financial Times article in 1973. 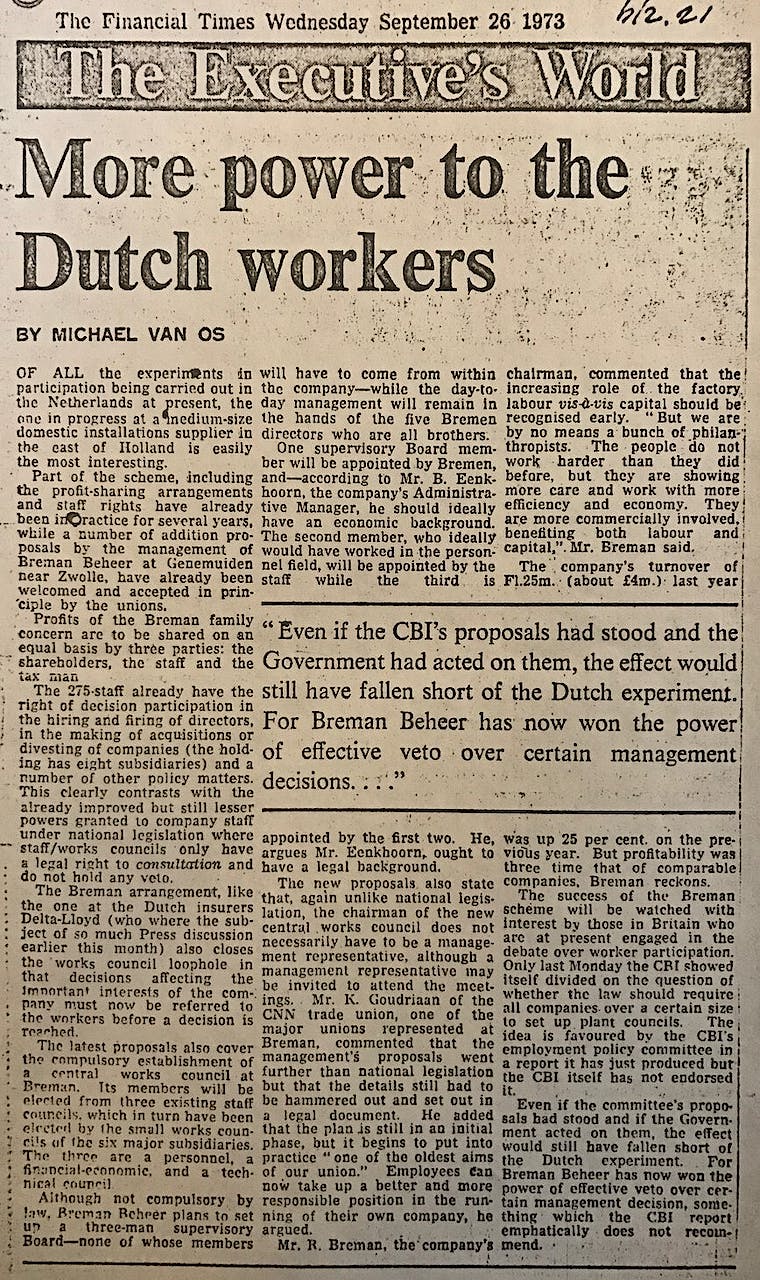 Since those early days, the Breman System has slipped out of sight. It is time to revisit this unique system.

Breman has used a unique organization and governance model (which they call the ‘Breman System’) since the early 1970’s. It is designed so that employees have just as much say over company assets as shareholders. And ...

Two sides as a foundation for success

The ‘Breman System’ was designed by Reind Breman, the father of René. It has survived for decades, and is deeply rooted in the organization. It is based on two components they refer to as:

A healthy balance between the two is regarded as a healthy ‘Breman System’. It is the foundation of everything they do and believe in.

The 'soft side' - the human

Rene: “The ‘soft side’ of the ‘Breman System’ consists of the purpose we want to achieve as a collective, combined with the principles of how we want to treat each other as humans within the organization.”

We break the so-called ‘soft side’ down into four different elements. Each answers a particular question, and is widely communicated to all employees;

Higher purpose - why do we exist?

The higher purpose of Breman is ‘Bremanism’. It means that together they want to ensure a better living and working environment—for themselves and future generations.

Bold goal - where are we going?

The bold goal of Breman is to be ‘energy positive’ in 2025. This means that they want to return more energy to employees, customers and the earth than it costs them.

Core values - what do we stand for?

Core qualities - what do we excel in?

Breman operates with five core qualities: to collaborate, to be a craftsman, to surprise customers, to master & learn, and to innovate with guts.

The 'hard side' - the structure

Rene: “The ‘hard side’ acts as the assurance of what we want to achieve together. This assurance is based on an alternative model that tries to find a way between capitalism and communism. It is a model that aims to radically disconnect capital from power.

So, we operate from a completely different perspective to many other companies. In a traditional company shareholders bring in the capital, and employees the labor. The employees receive their salaries, and profit goes to shareholders who hold the power.

Let’s describe the elements that make this unique model work:

The 1,700 employees at Breman work in 36 mini-companies. Each is registered as a separate legal entity, and kept relatively small. This makes Breman’s structure similar to other network of teams structures we have written about before.

As a result you can see all the local entities are different. Some operate with very progressive ways of working, while others are more traditional. Sometimes there is still considerable hierarchy in place. We have all flavors present.”

The employees of the 36 mini-companies select their own managing directors and decide how they will work in their own mini-company. Which is why some work with traditional hierarchies, while others use more progressive models.

Rene: “Any leader at Breman is appointed by the employees and the shareholders. But the employees not only hold the power to choose their leaders, they also have the power to remove them when they prove to be incompetent. In that way we ensure a culture of supportive leadership.”

Any leader is appointed by the employees. But the employees not only hold the power to choose their leaders, they also have the power to remove them when they prove to be incompetent. In that way we ensure a culture of ..

Simplified it works like this: Governance of the umbrella company is administered by three people;

When there is an important decision to be made – like an acquisition or a major investment – a proposal is sent to the umbrella company. The three people in the governance structure, however, do not decide about this proposal themselves.

Instead, they consult with the groups they represent, and thereafter a simple voting process follows. Each representative casts a vote, a ‘yes’ or ‘no’, on behalf of the group they represent. In case of a draw, the proposal is send back for revision. If after multiple revisions the voting still leads to a draw, then the fate is ultimately decided by pulling a straw.

Rene: “Extensive discussions take place on all important issues and decisions. That takes time and requires a lot from the representatives. A lot of information needs to be exchanged as both parties need to to have the full picture on the decisions to be made.

Nobody wants fate to be decided by pulling a straw. So all parties make sure to create the best possible proposal for all parties. This really works well.”

Company profit is shared equally among shareholders and staff. The family receives half the profit and the employees receive the other half.

Rene: “The family leaves most profit in the company as we want to ensure sufficient capital for long-term growth and investments. That’s why the shareholders only receive interest for the use of their capital.”

The mini-companies decide for themselves how to distributed the profit amongst themselves. In practice this is often decided by the managing directors of the mini-companies and their respective workers' councils. But note, employees still have full legal control over this process.

Not easy to start, and to maintain

The system René’s father designed is now carved in stone, but was not easy to make it official practice in the early days.

Rene: “The model was devised by my father and his brothers in 1971. They presented it to the employees and immediately put it into use. However it was not officially ratified by a notary until 1978. And then only by a notary on the other side of the country. For me this is a sign that it was not easy to validate the system legally on paper.

I still notice that today. We have and had many other business owners visit us. Some find our model interesting and want to introduce it in their own companies—until they talk to their accountants and lawyers. Suddenly they become less enthusiastic.”

And although the ‘Breman System’ has been in place for almost 5 decades, it has not always proven easy to maintain, even in their own case.

Rene: “In order to keep the system healthy I have learned that both sides are equally important. You need the ‘soft side’ to serve as a driving force to boost performance and bind us all together. But you also need the ‘hard side’ to guarantee this happens in the right way, and also in difficult times.”

Rene explains that at the beginning of this century, the ‘soft side’ was neglected for a few years. It led to serious consequences; “We have seen that if the ‘soft side’ is not present, things can turn traditional rather quickly again.”

They are still in the midst of fixing this: “We have been working hard at developing the ‘soft side’ for the last couple of years. This requires hard work and the fight to make the system completely healthy again is still going strong.”

Despite all struggles Breman’s business results speak volumes about their unique model. They have grown into the biggest independent player in the Dutch technical installation sector, with a turnover of over €300 million.

Written by Yuji Yamada
In October 2018, the Japanese IT company Yumemi launched a so-called “Agile Organization Declaration.” Over the years, this inspired them…
Read more
Jan 11, 2023
The Corporate Rebels Handbook - How We Handle Fuck-Ups, Meetings, and Compensation
Jan 11, 2023