Home Blog Giving Everybody Their Brain Back

Giving Everybody Their Brain Back

I was sitting with the CEO of a company in a traditional top-down hierarchy who was complaining that people just weren’t stepping up and taking responsibility to make the business successful. As we were talking, a “subordinate” walked in and he reminded her to do something. With true curiosity she asked, “So, why do we do it this way?”. His reflexive response was, “Because I got an MBA and you didn’t.” That helped us have a lively discussion.

We’ve all been there. Early in my career I was a captive employee in a traditional Factory System hierarchy. It was a marketing company – the Factory System is an organizational structure, not a building with smokestacks. And it was very predictable. The boss would get a directive from their boss, sit in their walnut-covered office and design a solution, then walk out and announce an audience with the pope.

It wasn’t a meeting, it was a speaker and an audience. The manager would very nicely and gently walk us through a three-step process. First, he would tell us the directive he had been given, and then secondly, he would share the supposed elegant solution that he designed. The third step was to “get feedback”, which is the basis for most Dilbert cartoons, where we tell him what a great plan he has and how committed we are to it, and then walk away not caring if it ever actually works. And over the course of the implementation, he was always frustrated that people weren’t taking responsibility to make it successful. This is repeated every day in companies around the world. And it doesn’t work because it ignores our basic humanity. 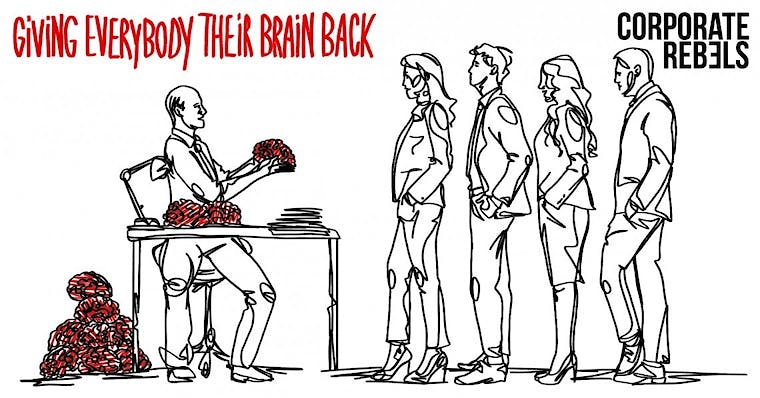 What makes us human?

Besides awareness, what makes us human? I would suggest that the second most prevalent attribute of being human is the ability to be creative – to build a bridge across a river instead of wading like other animals. To figure out a way around traffic. To buy a car, solve an accounting problem, decorate a house, design a career path, figure out a challenging mountain bike trail.

If creativity makes us human, what separates us from children and makes us adults? The ability to make decisions. Creativity is nothing more than a series of decisions. Michelangelo says he walked around a block of marble and simply chipped away everything that didn’t belong there, and David popped out. A welder uses the same decision-making processes to build a fence.

Our need to make creative decisions is the core of the problem. What’s the one thing you’re not allowed to do at work in a traditional hierarchy, unless you’re the boss? Make decisions. Is it any wonder 70% of people at work are just phoning it in, and 86% have not found something they love doing? It’s because the way we have designed work, doesn’t work.

If creativity makes us human, what separates us from children and makes us adults?

An imposed, top-down hierarchy takes all the decision-making away from those who have to carry out the decision, and turns them back into children. Input equals ownership. And with little or no input, we take no ownership. Or another way to say it, people commit to what THEY create. At Crankset Group, and in thousands of other companies around the world that have kicked imposed hierarchy to the curb, decisions are made where they have to be carried out. And whoever sees an issue or opportunity is responsible to grab it and run with it.

I know, I get it, that sounds like chaos and anarchy – decisions will now be made locally. I’m an adult, I can make my own decisions, I don’t need no stickin’ manager.

There is an incredibly simple, but not easy process for allowing adult decision-making locally that is still in the best interest of the entire company. We call it Two-Step Decision-making. The driving principles behind it are a) people commit to what they create (input equals ownership), and b) decisions should be made by those who have to carry them out. We are all decision-making adults – no exceptions. Nobody gets to avoid adulting at work.

If decisions should be made locally, then Step One is a question we ask whenever we see an issue or an opportunity that needs to be solved:

If that were the whole process, we would have chaos and anarchy. Step Two ensures we live in community and that no decisions are ever made in a vacuum.

Step Two people are affected, but won’t make the decision. They’ll ask hard questions to help Step One people to put their decision into the context of community. And sometimes they might even say, “That may work for you, but it doesn’t seem to work for the rest of the company.” They won’t impose an answer, they’ll simply ask the Step One people to keep designing a solution that works for the community, not just for them.

Step Two is the easy step to violate, whether in a traditional Factory System company with imposed hierarchy (managers with reports) or what we call a Participation Age company with organic hierarchy (leaders with people who choose to follow them). We think we’ve vetted our idea if we just get agreement from others who will have to carry it out. Step Two is the failsafe. And this doesn’t have to take a lot of time. Using Slack.com or other tools, you can ensure that everyone affected will have a voice in a very short amount of time.

Give everybody their brain back, and allow and require them to make decisions.

Do you want everyone to be fully engaged at work? Allow and require (some people won’t want to be adults at work right away) everyone to make decisions, and to do so in community via Two-Step Decision-making. Nobody will sit in isolation and design processes to impose on others. Now we are all strategic leaders, with the responsibility to ask good questions that ensure decisions are made for the benefit of the entire company, not for a single department, manager, or team.

Two-Step decision-making is simple. It allows us to be creative and make decisions, and finally be adults at work. Give everybody their brain back, and allow and require them to make decisions. It will change the direction of your organization.

This blog is written by Bucket List pioneer Chuck Blakeman, an entrepreneur, author, and business adviser with a strong focus on leadership, teams and Distributed Decision Making who helps organizations to become self-managed with the Crankset Group. He is about to publish a new book Re-HUMAN-izing the Workplace (By Giving Everybody Their Brain Back).

Written by Michele Rees-Jones
‘Blame’ is a loaded, negative word. But it’s a common reaction when something goes wrong. Some even look for people to blame. It shifts…
Read more
Dec 17, 2022
Let’s Fire All The Micromanagers
Dec 17, 2022

Written by Ari Weinzweig
One of the most radical of all our approaches at Zingerman’s, we ask everyone in the organization, from the minute they start working with…
Read more
Nov 30, 2022
To Hell With Corporate Hierarchy Titles
Nov 30, 2022

Written by Joost Minnaar
Corporate hierarchy titles are like woolly mammoths—except they never went extinct. Is it not time for a fresh look at both hierarchy and…
Read more
Nov 19, 2022
Change Management As A Soft Skill
Nov 19, 2022

Written by Joost Minnaar
In case you didn't know, change management is an important skill in organizations. After all, change is all around us, and it's never going…
Read more
Read all articles