From Patriarchy To Partnership – The Paradigm Shift Our Organisations Need

It’s no secret that the way we’re working isn’t working – Gallup’s latest poll tells us only 15% of employees worldwide are engaged at work; productivity is down; people are burning out at work; technology continues to disrupt the norms. But whether I’m working with large, hierarchical organisations or small, flat startups, I hear the same two complaints.

From leaders, managers and founders: “No matter how hard I try, I can’t seem to get my team to take initiative or be truly responsible for their work!” And from everyone else: “If only my manager/the leadership team/the founder would butt out and let us come up with our own solutions, we’d be so much more effective!”

We are in a paradigm and most of us are blind to it. You could call it Theory X or top-down, but one way to summarise it is that we are in a parent-child paradigm. There have been shades of this throughout history but perhaps none more dominant than the Industrial Era which was fuelled by the worldview that employees, then largely uneducated, are naturally stupid and lazy and must be monitored, controlled and motivated.

Incredibly, this is still the prevailing paradigm in workplaces today. We might have upgraded it a little, but not much. (Just read this mind blowing article by Aeon about the ‘stupidity paradox’ in organisations.) But what about companies that invest heavily in employee engagement programmes and making their people happy? Often this is just a different shade of being a parent – either a caring parent, or a coercive parent! The underlying belief is still: “people need to be motivated and taken care of to be productive.”

“We already know how to be good parents at work. The alternative, partnership, is something we are just learning about. Our difficulty with creating partnership is that parenting - and its stronger cousin, patriarchy - is so deeply ingrained in our muscle memory and armature that we don’t even realise we are doing it.”

How do we move to an adult-adult paradigm then?

There are two trends happening out there in the world in terms of organisations orchestrating this paradigm shift. The first is companies that are reinventing their structures and processes. The second is companies, regardless of structure, who are looking at different ways of being, that is to say: addressing leadership and mindset. (And of course some radical companies are pursuing both.)

But are different structures enough?

I believe that all the structural changes in the world won’t make a difference if we don’t also accept that we, as individuals, are also part of the system. Frederic Laloux in his seminal book 'Reinventing Organisations touched on something beyond structures when he wrote about ‘wholeness’ as being part of a next evolutionary stage in organisations (and human consciousness.)

“In all of these struggles, it is being human that creates the problem. We have not yet learned how to be together. Western culture, even as it continues to influence people everywhere, has not prepared us to work together in this new world of relationships.”

Part of the paradigm shift from parent-child to adult-adult is to learn new ways of being together and relating to each other. Two examples of research projects at Google point to this as well. The first is Project Oxygen which in 2011 revealed that the number one trait of the most effective managers at Google was ‘Be a good coach.’ (Number two, by the way, was ‘Empower, don’t micromanage.’)

The second research project, Project Aristotle, looked at Google’s most effective teams and discovered that psychological safety was the key. Leading the research, Amy C. Edmondson wrote about how we can create the optimum ‘learning zone’ when there is a culture of psychological safety AND accountability.

In other words, being adult-adult doesn’t mean we get to do what we want or that there is a leadership vacuum. It means we are truly in a partnership, accountable to each other. The most effective teams at Google, Amy found, were able to talk openly about mistakes, give each other candid feedback, and be radically honest with each other. 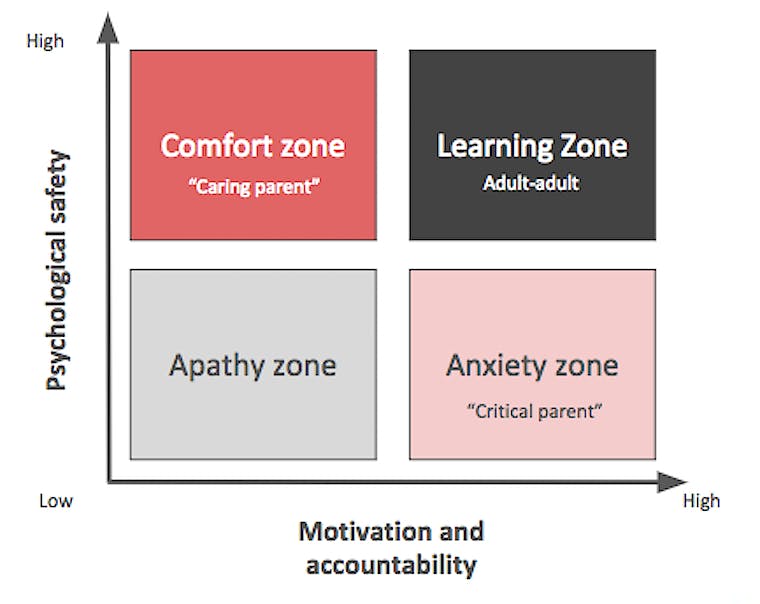 So in summary, it will be by practicing new ways of doing things AND new ways of being that we will make the paradigm shift that is needed in the world of work. Whether we work in large, multinational corporations or nimble startups, this shift from parenthood to partnership in work is relevant to us all.

When we have a truly adult-adult culture, it liberates each individual's full intelligence.

It won’t be easy – our parent and child ways of being are so ingrained in us, learned habits from school and work – but if we can create that Learning Zone that Amy writes about, we can support each other along the way. When we have a truly adult-adult culture, it liberates each individual’s full intelligence and creativity, creating workplaces that are nourishing rather than depleting.

This guest blog is written by Lisa Gill Lisa is a consultant with Tuff Leadership Training, which trains managers in a style of leadership that produces responsible employees and self-reliant teams, and the founder of Reimaginaire. She also hosts a podcast about self-management and leadership called Leadermorphosis.