Home Blog Purpose at Work: Why Work Should Be Meaningful

Purpose at Work: Why Work Should Be Meaningful

In his revolutionary book, Reinventing Organizations, Frédéric Laloux advocates that such organizations must be seen as having a life and sense of direction of their own.

"Purpose? What are you talking about?"

Try to think about the purpose of your own organization for a while. Don't be surprised if you cannot identify it, you're not the only one that doesn't know the purpose of his or her organization. Mostly it's because purposes are formulated in overly wordy, vague, and ambiguous mission statements that almost nobody in the company can reproduce. You can imagine it's hard to derive inspiration from that. Especially when these mission statements are seen as necessary evil to cover up the fact that the company just wants to make money. Organizations should address this issue rather quickly. That's exactly what KPMG, one of the Big Four Auditors, recently did. But more about that later. 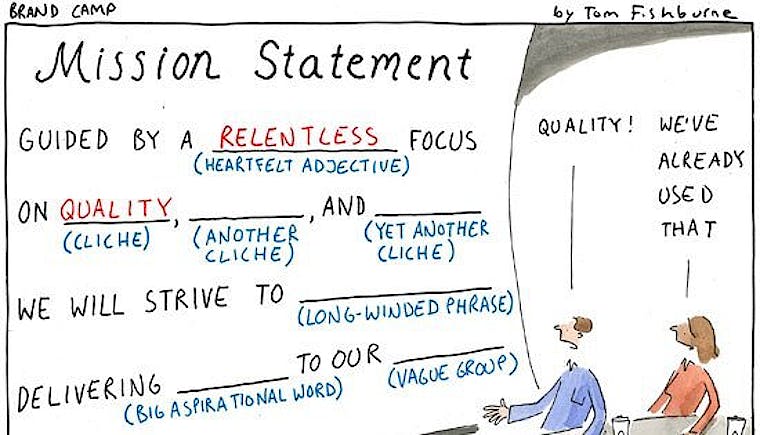 First some more insights about purpose at work and what actually drives us as recently described by Josh Bersin from one of the other Big Four Auditors; Deloitte. In his Imperative that claims that people have two main reasons to work;

It is reported that in 2015 only 28% of the American workforce is motivated to go to work by internal motivation. We can qualify these people as 'purpose driven' and we can find them in diverse roles and industries, from bus drivers to CEOs. It turns out that the other 72% of the workforce define work around financial gain or achieving social status and advancement. They are mainly focused on external motivations and have a 'colder' relationship with work. This makes us sad, and should make you sad too.

We can also observe some trends in the degree of motivation related to work. As you might imagine, artists are the most purpose driven group where laborers and hourly workers are the least. Of the interviewed CEOs 50% claim to be purpose driven, of the VP's it is a mere 39%. The educational and non-profit workers score relatively high with 48% and 46% of the workforce being purpose oriented.

However, this still means that the majority of these workforces are still motivated by external stimuli. In the other sectors the purpose motivation is shockingly low. For example, only 32% of the healthcare workers are driven by internal motivation. The technology, governmental and manufacturing workers score even lower. Of all the groups, only around 20% claim to be purpose oriented.

So, what can we do about it?

For inspiration we can take a look at the case of KPMG (professional services, 162.000 employees). Bruce Pfau, KPMG's Vice Chair of HR and Communications, recently wrote an inspiring article in the Harvard Business Review.

Convinced that today's workforce wants to be more than their paycheck, KPMG launched an initiative aimed at inspiring their already high-moral workforce. Their goal was to reach new levels of engagement by re-framing and elevating the meaning and purpose of their work.

First they asked their workforce to look at their work from a different perspective. KPMG wanted to move away from the idea that their employees see themselves as just another bunch of professionals doing a financial job. They tried to build a stronger emotional connection to the firm by reframing the employees daily roles. They encouraged their workforce to tap more from the internal source of motivation.

To look at themselves as members of a profession that helps millions of people around the world making better and wiser financial decisions. The following "We Shape History!" video was made and distributed around the company to fuel the internal stimuli.

Subsequently everyone in the company, from intern to CEO, was asked to share their own story about how their work is making a difference in the world. It turned out to be a huge success. They received 42.000 stories, partly because the company offered an incentive of two extra paid days off if they would reach the goal of 10.000 stories.

After this higher purpose initiative, an engagement survey was conducted. In particular, some very interesting findings can be derived from the comparison between survey scores of two different groups; 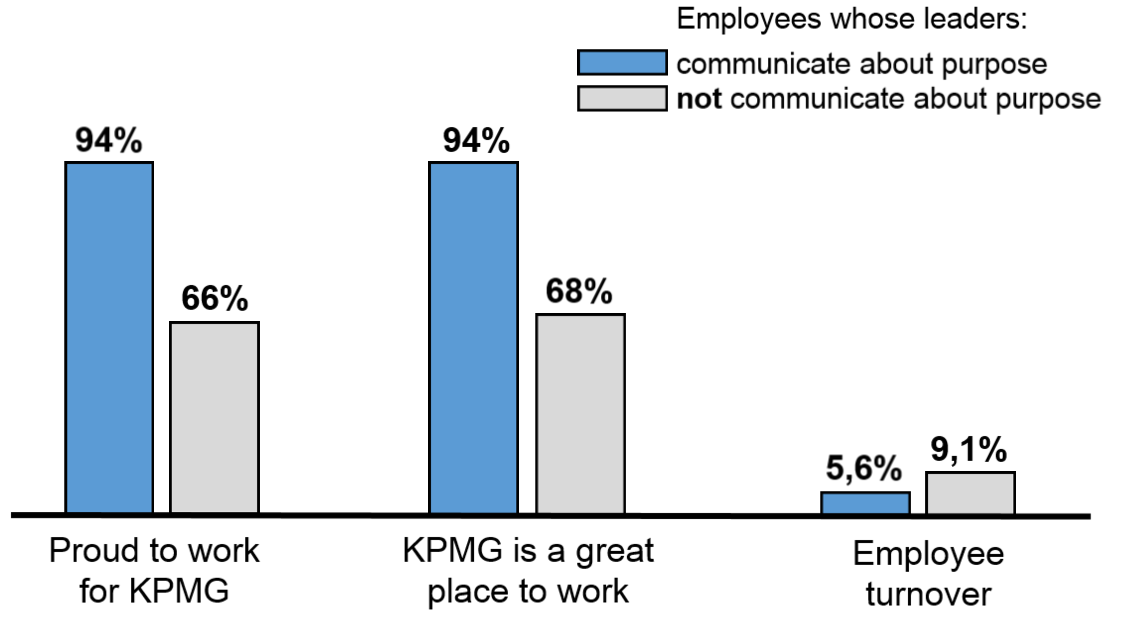 The 'disengaged' group is also reported to be three times more likely to think about leaving the company. The actual employee turnover rate illustrates this rather well, 5,6% versus 9,1%! An interesting fact is that there is no difference found across generations of employees. Motivation based on higher purpose seems to be equal among Millennials, Baby Boomers and Generation X.

With this relative simple example it is shown that higher purpose represents a huge opportunity to increase your own work engagement and motivation levels. We would like to challenge you to take some time to rethink your own motivation and how you might increase it. It has the tremendous potential to make you happier, healthier and more productive in your daily life.

Try to find or define a clear mission for your organizational goals. From those goals, try to distill your own unique higher purpose at work. You can ask yourself the same question as the people at KPMG did: "how can I share the story about how my work is making a difference in the world?"

Written by Pim de Morree
Today is an important day in Corporate Rebels history! We are announcing a new product we believe has the potential to radically change the…
Read more
May 21, 2022
A World Cup Built Off The Back Of Modern Slavery
May 21, 2022