Last week we received some amazing news. We’ve been listed on the Thinkers50 Radar list of 2018. This “Radar” lists “the 30 management thinkers most likely to shape the future of how organizations are managed and led”.

We are extremely proud that the Corporate Rebels movement has been recognized with this prestigious award.

To make the world a better place

The organization behind this list is Thinkers50. Its aim is “*To provide access to innovative ideas with the power to make the world a better place”*. A few months ago we were nominated for their Breakthrough Idea Award and invited to their Award Gala in London.

We are very happy to be recognized, again by Thinkers50, this time among the top 30 emergent management thinkers. Once again, this recognition is a boost for the worldwide Rebels movement. It’s for all of us who are actively supporting the transformation to better workplaces. 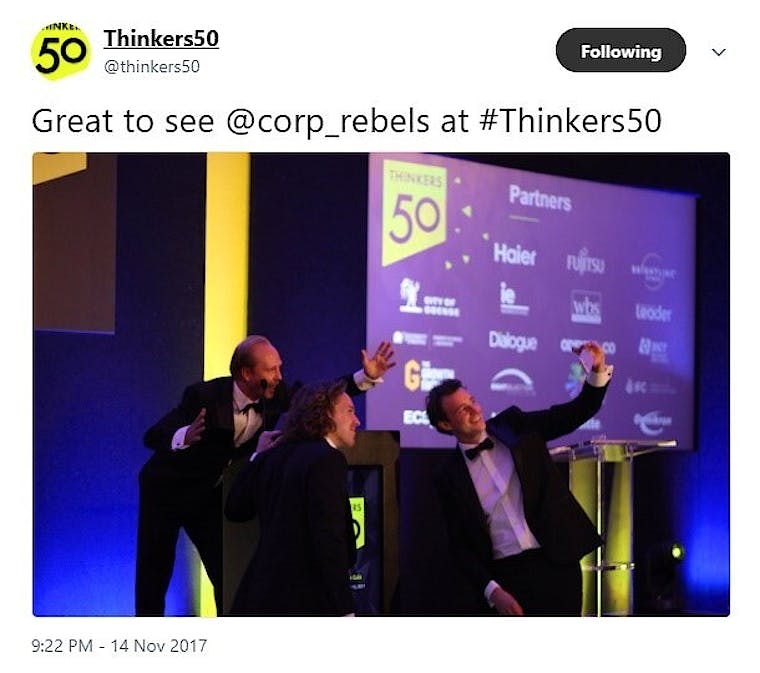 The official press release reads: “'The Radar list is keenly anticipated', says Thinkers50 co-founder Des Dearlove. 'It is an early warning system to alert managers about the people who are doing exciting and important work. We hope to see many of them on future Thinkers50 rankings of the world’s leading management thinkers.'

The Thinkers50 Radar list is more global than ever before. Nationalities represented include the Netherlands, South Africa, America, India, China, Norway, Canada, and the UK. In 2018, for the second time, the Radar includes more women than men. The rise in influential women thinkers is also notable on the Thinkers50 ranking where the number of women thinkers has grown rapidly over recent years.”

Being named on this list is a recognition for all the Corporate Rebels out there fighting for better workplaces.

The full press release can be found here.

Since we started in January 2016, the Rebels movement has grown all around the world. In the last few months, especially, we’ve noticed strong growth in every aspect of our work.

Are you ready to join the movement for better work as well? Find out how you can join.

Written by Pim de Morree
Today is indeed a lovely day — it’s the day we announce our entirely new website! We've given the site some major changes to not only…
Read more
Jan 11, 2023
The Corporate Rebels Handbook - How We Handle Fuck-Ups, Meetings, and Compensation
Jan 11, 2023

Written by Joost Minnaar
The first week of January is traditionally a time to make New Year resolutions - the time of the year when we look forward to the new year…
Read more
Dec 21, 2022
Make 2023 the Year You Become a Corporate Rebel
Dec 21, 2022

Written by Pim de Morree
Attention all readers! We are excited to announce that we will be taking a short vacation break. For the next two weeks, we will be…
Read more
Oct 01, 2022
Meet Our New Subscription Model
Oct 01, 2022

Written by Pim de Morree
Three months ago, we announced the debut of our subscription model to the world. The response was amazing. Hundreds of pitch deck requests…
Read more
Sep 17, 2022
Next Up: A Bucket List Trip To Japan
Sep 17, 2022

Written by Joost Minnaar
Six years ago, we created our Bucket List of organizations, entrepreneurs, academics, and business leaders who changed the status quo of…
Read more
Read all articles