A World Cup Built Off The Back Of Modern Slavery

The 2022 FIFA World Cup has been appearing in the news for all the wrong reasons and is already one of the most controversial sporting events that have been organized. There have been many concerns about Qatar’s suitability as a host country but even more touched on is the treatment of workers hired to build the infrastructure. This is something that FIFA should have been aware of when the decision was made to host the event in Qatar due to the knowledge that the country relies heavily on migrant workers and its exploitive labor system. 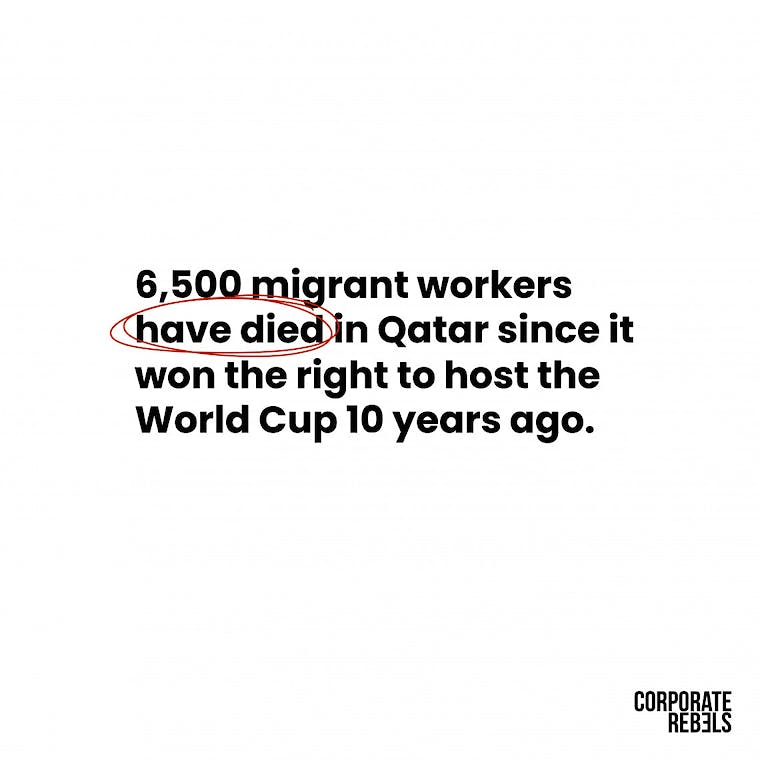 According to Human Rights Watch, Qatar has a migrant labor force of over 2 million people, who comprise approximately 95 percent of its total labor force. Roughly 1 million workers are employed in construction, while around 100,000 are domestic workers.

Securing the world cup in December 2010 was an opportunity for Qatar to show that it was serious about workers’ rights, however, it wasn’t long before this image diminished with reports of exploitation and labor abuse.

The Kafala system played a significant part in the exploitation of workers in Qatar, and it’s useful to have some knowledge of the system as a new Kafala law was enacted in 2009, one year before Qatar secured the world cup.

According to the migrant forum in Asia “Under the Kafala system a migrant worker’s immigration status is legally bound to an individual employer or sponsor (kafeel) for their contract period. The migrant worker cannot enter the country, transfer employment nor leave the country for any reason with first obtaining explicit written permission from the kafeel.”

Under the new law in 2009, migrant workers could still not leave the country or change jobs without their employers’ permission.

The FIFA World Cup is only months away. Use your voice to help us raise awareness.

In 2021, The Guardian released some pretty shocking statistics. They reported that more than 6,500 migrant workers from India, Pakistan, Nepal, Bangladesh, and Sri Lanka have died in Qatar since it won the right to host the World Cup 10 years ago.

What’s even more concerning? It is believed that the actual death toll is significantly higher, as these figures do not include deaths from a large number of countries which also send large numbers of workers to Qatar.

Although the records are not categorized by occupation or place of work, it is clear that a very significant proportion of the migrant workers who have died since 2011 were only in the country because Qatar won the right to host the World Cup.

The ILO (International Labor Organization) also reports that grievances expressed by migrant workers also included confiscation of passports, delayed or non-payment of salaries, long working hours, and violence- all conditions that can give rise to situations of forced labor and human trafficking.

Until recently, migrant workers have been trapped in this cycle of abuse. That was until the year 2020.

In 2020 Qatar made some significant progress and it was announced that they would be ending the No-objection certificate requirement. This means that all workers should now be able to change jobs without their employer’s permission and introducing a new mandatory minimum wage in August.

This was seen by many as a historic move. The ILO expressed that these new laws “effectively dismantles the ‘Kafala’ sponsorship system end marks the beginning of a new era for the Qatari labor market”.

Some positive progress indeed. But is the reality really matching the promises made? Sadly not. Human Rights Watch explain that “Employers still wield tremendous control over migrant workers’ lives, allowing them to evade accountability for labor and human rights abuses, and leaving workers debt-burdened and in constant fear of retaliation.”

This doesn’t sound like the beginning of a new era as expressed by the ILO.

What about the end of the No-objection certificate? Amnesty International conducted some interviews with representatives of migrant workers’ rights organizations and they found out that “Almost two years after the removal of the exit permit, workers’ organizations and representatives of embassies in Qatar acknowledged that leaving the country had generally become easier.”

However, migrant workers are still facing large hurdles. Amnesty International further explain that some of these hurdles include “employers refusing to provide the air ticket fair to return home or filing spurious ‘absconding’ (running away from a job, which is deemed a criminal offence in Qatar) or theft against employees, and failing to renew workers residence permits, undermining their ability to leave the country.”

And what about the new mandatory minimum wage? Amnesty International found out that “late and non-payment of wages and other contractual benefits remain some of the most common forms of labor abuse facing migrant workers in Qatar. Despite the measures introduced to monitor payments and help workers seek remedy, many migrant workers continue to fall victim to wage theft by their employer.”

Amnesty International found out that “late and non-payment of wages and other contractual benefits remain some of the most common forms of labor abuse facing migrant workers in Qatar.

Action Must Be Taken

Supported by the ILO, and encouraged by its partners, the Government of Qatar should:

The FIFA World Cup is only months away. Use your voice to help us raise awareness.

Feeling rebellious? Pressure FIFA to initiate an investigation of migrant abuses including unexplained deaths and ensure that migrant workers or their families are adequately compensated.

Together, we can make a difference.

This article was written by the Corporate Rebels Foundation. Unfortunately, there are still too many inhumane workplaces that we as consumers are contributing too, without being aware of it. Creating awareness around this topic is one of the ways to get a step closer towards our mission to end inhumane workplaces. Learn more about the foundation at corporaterebelsfoundation.org

Do you know of any projects that we can support? Then please email us at info@corporaterebelsfoundation.org

Written by Emma de Blok
Share or join the discussion!
Our newsletter
Are you ready for more revolutionary content?
You can follow us on social media

Written by Pim de Morree
Today is an important day in Corporate Rebels history! We are announcing a new product we believe has the potential to radically change the…
Read more
May 07, 2022
The Great Resignation: How To Stop Losing Your Talent
May 07, 2022

Written by Christian Wandeler, Ph.D.
Companies across the globe, and particularly those in the US, are facing a great challenge: people are quitting their jobs or people are…
Read more
Read all articles