Home Blog DISC And MBTI SUCK — Except For One Thing

DISC And MBTI SUCK — Except For One Thing

DISC and MBTI are the two most popular personality tools around, even though neither make any sense at all. Rebels, I hope you're not using them. And if you are, why? 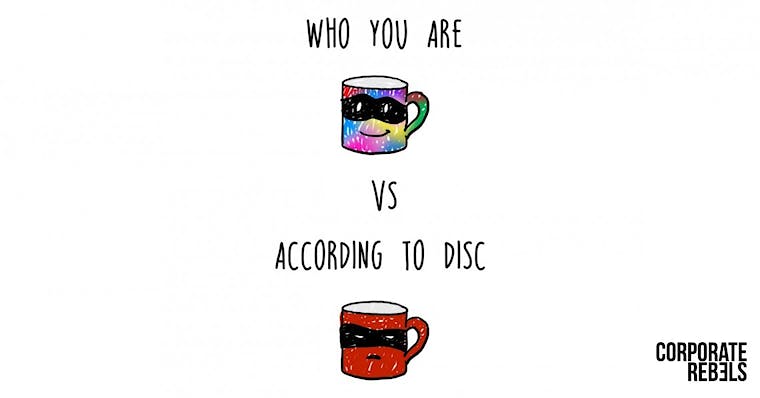 Both have staked a place helping organizations around the world select new hires, help teams to grow together, and allow people to understand each other better. Both are multi-million-dollar industries, with countless workshops and seminars, where people are trained to educate others in this baloney.

Why do they suck?

The scientific community is crystal clear about DISC and MBTI: they predict nothing.

What you want from a personality test (or similar) is a result that tells you about how a person will likely behave in the future. Will he or she fit into your organization, or the job?

Both DISC and MBTI can’t make significant predictions about behavior. Like flipping a coin, or horoscopes, they are occasionally right. But that's more luck than a firm prediction.

Also notable is that the test scores change when done multiple times. A large number of people who do the MBTI-test get totally different results after an interval of 5 weeks That shouldn't happen.

Above all, both are too simplistic. Personality is more diverse and complex than a set of colors (blue, red, yellow, green), or dichotomies (completely extravert or completely introvert).

The scientific community is crystal clear about DISC and MBTI: they predict nothing.

Why are they still being used, then?

There are many reasons:

DISC and MBTI are easily understood. They are both label-makers. And if we don't have to think hard when using them, that's a benefit. It makes them applicable and translatable to those that need/want to use them.

But they are actually pimped-up horoscopes. You can always recognize yourself or another person when using them. It's easy to believe they work. But, like a horoscope, we tend to focus on the parts that fit and align, and ignore those that don't. Everybody can plainly see (and tell) that Fitzgerald the Financier (always hardheaded and busy with numbers) is clearly Blue. And we shouldn't expect Fitzgerald to think about how to treat people in the workplace with love and care. But then we forget Fitzgerald is actually very humane. Take, for example, his volunteer work in a retirement home. With the Blue color, we dangerously oversimplify the much more complex Fitzgerald.

In stark contrast to real, scientifically validated personality-theories and tests, MBTI and DISC are fed by marketing and business empires that push them brilliantly into view. And the color scheme fits our everyday vocabulary. In the past scientific papers were fabricated to prove their validity. They have been debunked and disproven since. But we still keep believing in them.

Both tools balance out the positive and the negative in every personality outcome. The negatives make them seem credible (because if everything is positive in a set of personality outcomes, it's bogus). And people feel good about themselves, no matter the outcome. It feels fair when compared to the outcomes of colleagues: they too have the same balance of positives and negatives. True personality doesn't enjoy that luxury. But, it’s not what people want to hear.

What's the one thing that's good about them?

As far as I'm concerned, the one good thing about DISC and MBTI is that they foster interest in, and awareness of, differences between people. And that is a great thing.

But you can do the same thing with theories and constructs that are actually proven, predict behavior, and don't put people in stifling boxes.

DISC and MBTI are like low-resolution photographs. They have lots of pixels and very simplistic resolutions. You haven't a clue what you're looking at when looking at the photograph. But the first photo looks clearly different to the second. That's about it.

Therefore... It's time for HR, recruiters, trainers and others to abandon DISC and MBTI and start using real personality constructs, tests and theories.

What are the alternatives?

The Big Five and HEXACO are both scientifically solid constructs that are great in measuring personality and predicting behavior. The tests are harder to fake (it’s easy with MBTI and DISC), and they both have tons of scientific literature supporting them, which can point out how people will probably vote in the next elections, how susceptible someone is to stress, burnout or some kind of mental disorder. And they predict how someone will likely perform at work. A great number of other implications and findings say something about the behavior of people with a certain set of personality characteristics.

Both the Big Five and HEXACO work with dimensions, which means people can average out right in the middle of Extraversion and Introversion for instance: an Ambivert. Or they can tell that certain people lean towards extraversion, but that at lots of times they will exhibit introverted behavior. This makes for a much higher resolution picture of someone. Goodbye boxes and labels.

Therefore... It's time for HR, recruiters, trainers and others to abandon DISC and MBTI and start using real personality constructs, tests and theories. In the current age of inclusivity and diversity, and avoiding labels, we can't use fake tools anymore.

Cambridge Analytica used the Big Five (and not DISC or MBTI) to predict the behavior of people so that they could target them better with ads and messaging on Facebook. The aim was that people would be persuaded to believe certain political campaigns, like Brexit. They were quite successful, and probably would not have been if they’d used the other two.

This is a guest post from Lennard Toma, founder of KeytoeY a company to help other companies change into organizations where people enjoy their work. For more information on Lennard and the company, check out his rebel page.

Written by Lennard Toma
Organizational Psychologist and allround experimental nutty guy. Love pushing some boundaries and do a lot of different things.
Connect
Share or join the discussion!
Our newsletter
Are you ready for more revolutionary content?
You can follow us on social media

Written by Ari Weinzweig
One of the most radical of all our approaches at Zingerman’s, we ask everyone in the organization, from the minute they start working with…
Read more
Nov 12, 2022
Emotional Intelligence (EQ) in Leadership for Flat Organizations
Nov 12, 2022

Written by Pim de Morree
The days of the traditional leader are over. (Well, if it were up to us.) Leadership can be much more dynamic than traditional pyramid…
Read more
Nov 09, 2022
What If Your Company Was Divided Up Into Countless Startups?
Nov 09, 2022

Written by Pim de Morree
The Great Resignation was all the hype earlier this year. Then Quiet Quitting took over the headlines when hordes of people popularized…
Read more
Sep 24, 2022
A Four-Day Workweek: It's Better For Everyone
Sep 24, 2022

Written by Joost Minnaar
Are you working your ass off? That's something to be proud of—hard work typically means putting in a lot of hours. At least five days a…
Read more
Read all articles