Home Blog The Perks of Google: Heaven on Earth or Just Lipstick on a Pig?

The Perks of Google: Heaven on Earth or Just Lipstick on a Pig?

Many of us heard the stories and a lot of us probably got jealous of the abundance of perks enjoyed by Google employees. From gourmet food and fully equipped gyms to free massages and the famous '20% time' rule. Everything seems to be possible and nothing seems crazy enough for those lucky enough to call themselves a Googler.

They are consistently ranked as one of the best employers to work for by Glassdoor. But our personal experience of working for "top employers" (which, by the way, almost every company is nowadays) teaches us it doesn't necessarily mean it's a highly inspiring workplace.

So we thought it was time for us to dig a bit more into what it's like to work for one of the most desired places to work. After our earlier visit to a Google office, we now went over to the Googleplex (Google's headquarters) in Mountain View, Silicon Valley. We wanted to find out if working for Google lives up to its reputation or if all the perks are just lipstick on a pig?

The last months we talked to various Google employees (on and off campus) and visited two of their offices, including Google’s main campus in Mountain View last week. Upon the request of some of the employees we talked to we will not mention any names. Additionally, we tried to speak with Laszlo Bock, former Senior Vice President of People Operations and author of the book Work Rules!. Unfortunately we have not been able to talk to him yet; hopefully this will change in the not too distant future.

So.. Let's break down our perspective on what it's like to be a part of the Google family. 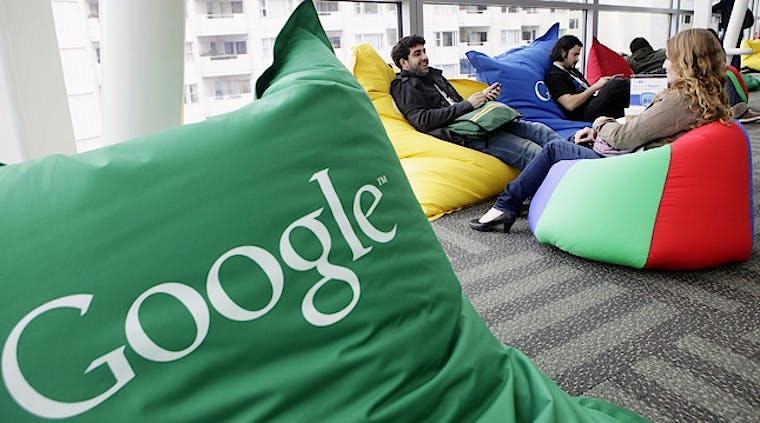 The perks are no lie. Believe it or not, they are all there. From the Google shuttle bus to Mountain View (buses equipped with WiFi so it’s like a rolling office), massage & work-out rooms, yoga studios, plenty of free food & drinks (whatever you can think of), laundry services, outdoor terraces, personal trainers and even swimming pools. We have seen them all. And we have to admit, it’s impressive. It not only makes people feel at ease, it also stimulates serendipitous interaction outside the regular meetings between colleagues. Because of that it facilitates opportunities for idea exchange and stimulates creativity and innovation.

Even thought the perks are amazing, they don't seem to result in so-called golden handcuffs. Many of the employees eventually end up leaving; a couple of ‘Google years’ on your CV seems to make you the ideal bait for any recruiter. Although, one of the persons we talked to mentioned the so-called 'boomerang effect': "It happens a lot that former employees come back to Google once they find out that working in other organizations doesn't have these amazing perks".

Google has been pioneering the way we work in more than just the perks. They came up with the weekly town-hall meetings in which founders Sergey Brin and Larry Page show up and connect to the employees to discuss a diversity of topics. It gets employees involved and engaged, as we've seen in lots of other workplaces that have introduced a similar practice. Besides that, Google established a manager feedback system in which teams and individuals rate their manager. This not only creates an environment in which managers are held accountable for their work, it also gives the team members a stronger voice in how the managers work.

What else? Well, they established the famous 20% rule in which employees can do whatever they think benefits Google, even if this is out of their scope of work. Unfortunately, the 20% time rule is not a big part of working at Google anymore (especially not outside tech divisions). According to Laszlo Bock only 10% of Googlers are using it, last time the company checked. He writes in his book that it's more important that the idea exists than that it's actually used. However, some of the employees we talked to mentioned it depended highly on whether or not your manager is willing to allow you to use 20% of your time to work on your own project.

As described in Laszlo Bock’s book Work Rules! the company has an extremely engineering-driven culture. They use the (statistically significant) data from the 50.000+ employees to improve the culture in a scientific manner. As an example, Laszlo describes how they have studied lunch time behaviors of Googlers in much detail. They redesigned their snack rooms in an effort to make their employees eat healthier. Healthy snacks were displayed in easy to reach and clear containers, where candy was placed in dark containers in harder to reach areas. The result? Googlers reduced the total amount of calories consumed from candies by 30%.

Another very interesting study conducted by Google is the so-called Project Oxygen, a study designed to identify what successful managers do.

What do successful managers do differently? (According to Google)

Behaviors are listed in order of importance.

Google ain't a start-up anymore and that has its consequences. Over the years Google grew rapidly and by doing so it became a large and globally distributed corporate. In order to continue its growth Google needs to make money. And to no surprise they are making plenty of it. Their main source of income is advertising; AdSense and AdWords generate a large majority of their total revenues (about 90%!).

The machine needs to run and is not necessarily connected to Google’s purpose ‘to organize the world’s information and make it universally accessible and useful’. Even though Google prides itself for being highly purpose driven, plenty of its employees execute work that is not very much in line with this purpose. As one of the employees said: "A part of the company is working on amazing things that are literally changing the world. But there's a very large portion that is just here to make money; not that inspiring as you can imagine."

A tangible lack of trust

ogether with the impressive growth of Google came an increase in command-and-control. During our search we encounter plenty of organizations that have a strong focus on intrinsic human needs such as trust, openness, transparency and fairness. Google, however, doesn’t seem to pioneer in any of them anymore. Illustrative is the fact that it is very hard to get a real and honest story out of the place. No visits are allowed unless you’re invited by a Googler host (luckily we were). If you aren’t fortunate enough to be invited by one then you just have to deal with the Android sculpture garden (which they can better call the Android sculpture cemetery). And do you want to bring out an official story as an employee? Be ready to be controlled by an army of lawyers. Similarly, the fact that some of the employees want to remain anonymous speaks for itself.

But it's not just an external lack of trust. One of the employees: "My manager doesn't want me to work outside the office. Only when I have a very good reason not to be in the office, I am allowed to work from home." Quite different than what we saw for example in the Belgian Ministry of Social Security.

We often write about innovative organizations that are experimenting with flattening the hierarchy and increasing equality. We expected Google to be one of these places as well. But after our interviews and visits, Google doesn't seem to be particularly pioneering in those areas. Compared to many of the progressive companies we visit, there is still a lot of hierarchy in place with plenty of talented people eager to climb the career ladder. However, there are just a limited amount of places available on ‘Google’s ladder’, causing fierce competition among the ambitious workforce.

The result: many of the Googlers are doing work ‘that needs to be done’ but not necessarily things they want to be doing. Equality among the workplace seems to be far away as well: “Being an engineer at Google is like being god. Engineers at Google seem to climb the ladder easier leaving the rest of the workforce frustrated with their unmet ambitions” .

Lagging behind the pioneers

To us, Google seems to be part of some of the better places to work. It easily beats the vast majority of boring workplaces that are still omnipresent in this world. However, if we compare the way of working of the search giant to most of the other organizations on our Bucket List, they don't seem to be in the pioneering group anymore. The various aspects we often witness (among others: highly purpose-driven, no or highly reduced hierarchy, radical transparency, trust, openness, flexibility and freedom) are not as much present at Google as they are in other inspiring workplaces.

It's definitely not just lipstick on a pig, but it doesn't seem to be heaven on earth either.

Written by Yuji Yamada
In October 2018, the Japanese IT company Yumemi launched a so-called “Agile Organization Declaration.” Over the years, this inspired them…
Read more
Jan 11, 2023
The Corporate Rebels Handbook - How We Handle Fuck-Ups, Meetings, and Compensation
Jan 11, 2023