Less Is More: What Organizations Can Learn From Mies Van Der Rohe

‘Less is more…’ This phrase, not invented by, but often used by Mies van der Rohe, represents the ideal of creating something so beautiful it cannot be further reduced. Even if you are not a student of architecture, this idea can be understood by looking at the so-called German Pavilion he designed for the 1929 Barcelona International Exposition. Not a single wall of the structure can be removed. 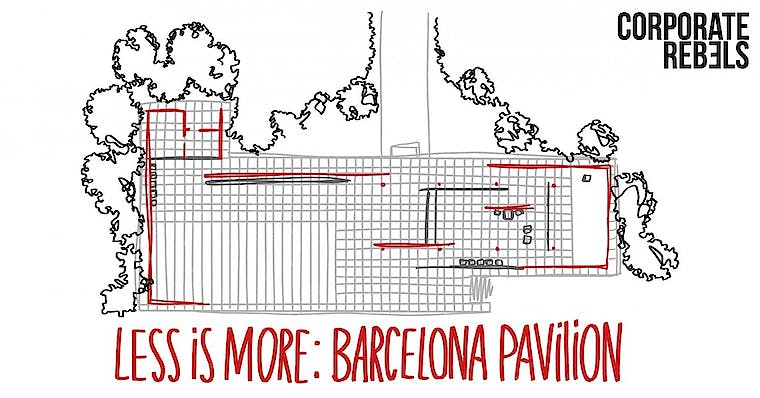 State of the art

In the field of architecture, less is more is seen as ‘state of the art’. The principle describes design where reduction represents a higher level of taste.

In organization design, a discipline still referred to as management (although the expression management comes from the French word manage, meaning ‘dresser of horses’), the paradigm seems to be the opposite. Let’s make things as complicated as possible so that, ultimately, nobody understands what it’s about.

Last week, I had the honor of being on a panel at the Rendanheyi Boundaryless Network, an initiative of Haier. The title of the discussion was: ‘How can Microenterprises avoid falling prey to the bureaucratic dilemma?’

While preparing my presentation, I thought of the less is more notion. Why? Because in organization science or management we seem inherently fond of making things complicated.

In architecture, less is more is seen as state of the art. In management the paradigm seems to be the opposite. Let’s make things as complicated as possible so that, ultimately, nobody understands what it’s about.

I wonder why? Is it the mindset? Or is it inevitable—a natural phenomenon that organizations become more complicated when they grow, be they companies, teams or states? Is it easier to add to something rather than remove it?

Were things less complex in the past? Did we have fewer laws then? Does society operate more efficiently now than it did previously? Are our schools or health systems better now than when there were fewer rules?

It appears to be an unspoken rule that things become more complex as corporations expand, with teams becoming bigger and bigger, until nobody knows who is doing what anymore, and who is responsible.

Is this ever-growing complexity Frederick Taylor's fault? Is it caused by managers or consultants, who justify their existence by explaining in ever more complex cycles how other people have to do their work?

Complexity is more about how many layers or elements a system has. Complicated seems to be more about how difficult something is. Or to put it in words everybody understands: Does it make us look more intelligent when we complicate things?

I like to think we can change the paradigm in organization science back to less is more. Let us recapture the beauty of simplicity and reward it as such. Let us realize it is very easy to make things complicated or more complex, and that the real challenge is to make or keep things simple.