Home Blog The Pains Of 100% Remote – And Some Relief

We’re all about remote at Wildling. Our approach to work is self-directed and decentralized—entirely voluntary, entirely by choice. But now that distancing has become mandatory, things feel different. And as used to remote work as we are, we’re feeling a sharp phantom pain that can only be healed at a personal level. Now we’re trying to schedule in some fun. Can that work? 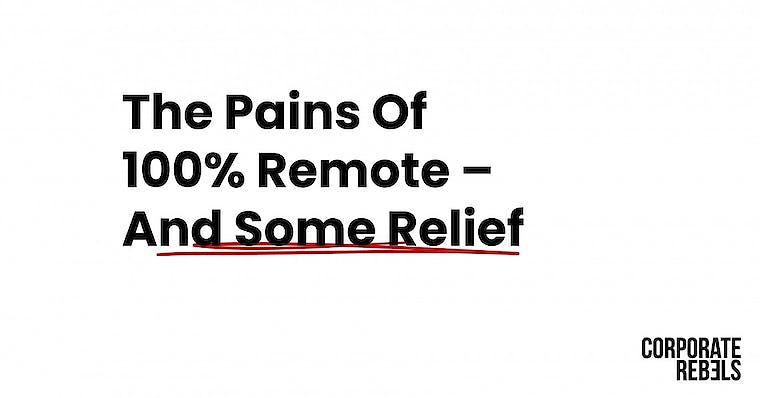 COVID made one thing painfully clear to me: between 99% remote work and 100% remote work lies a world of difference.

Since 2015, my husband Ran and I have run our company Wildling on a decentralized basis. Initially, this was because our children were small, which made working from home a great option. We continued because everything ran so smoothly. Plus, it allowed us to recruit the cream of the crop for our team, no matter where they were based.

We had mastered all of the rules for being free in the virtual world. Or so we thought. To round out the picture, a few meetings were held in the offline reality—the one percent. I considered this an added plus, a nice touch.

The toll of forced remote work

A year into the COVID-19 crisis, and two lockdowns later, I now realize that in our physical, interpersonal interactions, are the little things that create a sense of cohesion, even for us WFH veterans.

Laughing together, sharing a meal, goofing off, letting things get wild. I miss that more than I ever thought I would. I want to be out there feeling the pulse of the people again. But how?

Surprisingly, it turns out our corporate culture relied heavily on the few face-to-face meetings we actually do have. These unplannable moments create the bonds. The summer party—the three-day camping trip in the spring with no kids, no cell phones, but plenty of dancing.

A veritable utopia from today’s vantage point. Or our “Team Monthlies,” where all the Wildlings came together from every corner of the country to meet in Engelskirchen, and after stood together around the campfire.

We underestimated how important it is to be face to face. This loss only reared its head when we couldn’t do it anymore. None of the tools we had used to blow off steam were available now.

COVID made one thing painfully clear to me: between 99% remote work and 100% remote work lies a world of difference.

There’s no denying it’s a problem. Irritability in the communication channels is on the rise. I myself find the whole situation weird.

I feel the same way, too. I’ve allowed many a spoken word, or whatever was left unspoken, to rub me the wrong way. Even emoticons can get political.

Now we hop on one-on-one video calls as a kind of meta-communication tool aimed at soothing volatile moods. Like, in the vein of “What did you mean by that thing you wrote on Slack the other day?”

Staying productive and efficient has never been our problem, and still isn’t. But forced remote work is starting to take its toll on people’s nerves.

Onboarding is tough, too. There are new co-workers I have never met in person. I can’t suppress a faint sense of alienation.

Absurd as it sounds, we have been counteracting this feeling for some months now with planned spontaneity. Yes, it’s a crutch, but it still does the trick.

In a remote setup, you need structure to accommodate the productive chaos. But does structure also bring smiles and camaraderie to the home office?

I now realize interpersonal experiences need to be created intentionally, otherwise they are drowned in the noise of Asana, Slack, and utilitarian Google calls. As a start, free up time for the seemingly trivial.

Our “White Russian” meetings, or W&R for short, are an example of this. It started with an idea from our marketing team lead: Let’s do a half-hour video conference every week, with the strictly enforced rule that we can’t say a word about work!

The catch is that everything we talk about has to have something to do with the letters W and R. That’s how we happened upon the topic of Wissensreste, which in German means something like “leftover knowledge.”

What is something you used to be able to do but can’t do anymore? Hilarious confessions came rapid-fire from all directions—from forgetting how to do a handstand to absconding by train before a French exam.

Anyone who can’t participate must opt out using a phrase beginning with a W-word and ending with an R-word. “Won’t respond” would work, for instance.

It might sound like a half-baked idea, but in this informal half-hour, the laughter-filled banter and horsing around, is so incredibly important we don’t want to do without it ever again.

In a remote setup, you need structure to accommodate the productive chaos. But does structure also bring smiles and camaraderie to the home office?

On the contrary. After the first, fantastic experiences we had with the team leads, we now want to launch W&R in every department.

As it turns out, the “White Russian” is a remedy for something we could hardly name before.

We’re encouraging each working group to take that half hour. We’re convinced these low-key get-togethers aren’t time wasters—they are energy boosters. You can’t feel the pulse without making contact.

That’s why co-lead Sebastian and I are always happy to join any of the Team Weeklies. We’ve asked every team to invite us to their meetings. Coffee dates have been a hit, too. In groups of three, people meet to have a coffee with colleagues over video.

You end up chatting with co-workers who you’ve maybe never talked to before. We prepared flashcards with conversation starters. “What’s the wildest thing you’ve ever done?” Stuff like that. Of course, it’s all voluntary.

I don’t consider myself to be a gifted small talker, but I end up having so much fun. Already 82 of our ~200 staff members have joined the Slack group. And as many as 134 join the “Happymoment” channel.

That’s where anyone who wants can post pictures of their own wonderful experiences—and reap amazement, encouragement and likes. One look into the Happymoment channel is all it takes to see what unites us—the same things that spark joy in our hearts—like art, music, our children or nature. Some demonstrate a hobby, or surprise us with some special talent.

Another thing that became clear to us during the pandemic was that team size is crucial to nurturing close personal relationships.

Between five and eight of these 30-minute video sessions have a designated slot in my weekly schedule. I need them, not just as work meetings, but also to get a sense of what’s really going on.

And our next IRL meetings? We’ve decided not to schedule them quite as often as we used to. But when we do, we’re going to make them strictly no work. One thing is certain—the next time we all get together, whenever/wherever that may be, we’re going to have the best time ever.

This is a guest post by Anna Yona, founder and CEO of Bucket List company Wildling Shoes. For more information on Anna and the company, check out her rebel page.

Written by Anna Yona
Founder and Managing Director of the minimal shoe brand Wildling Shoes (www.wildling.shoes)
Connect
Share or join the discussion!
Our newsletter
Are you ready for more revolutionary content?
You can follow us on social media

Written by Pim de Morree
What most companies call "remote work" is actually just a new name for all the bad stuff that used to happen in offices. Back-to-back…
Read more
Feb 02, 2022
Our First Piece In HBR: Using Tech To Make Work More Fun
Feb 02, 2022

Written by Joost Minnaar
Some months ago, we were asked to draft our first piece for the Harvard Business Review. Last Friday, our article, "How Companies Are Using…
Read more
Nov 24, 2021
Remote Work Is NOT Working The Remote
Nov 24, 2021

Written by Pim de Morree
The vast majority of employers have been fiercely against the idea of remote work for ages. Before the pandemic hit, most companies lacked…
Read more
Oct 16, 2021
The Business Case For Remote Work
Oct 16, 2021

Written by Pim de Morree
Global Workplace Analytics published a comprehensive report on the benefits to employers, employees, the environment, and society. The…
Read more
Mar 13, 2021
Future Advice About Going Back To The Office
Mar 13, 2021

Written by Jon Barnes
As some semblance of hope starts to bubble up and our minds tempt us with the thought of things going back to normal, I have a small fear…
Read more
Mar 03, 2021
Spotify Announces 'Work From Anywhere': How Does It Work?
Mar 03, 2021

Written by Pim de Morree
Spotify does it again! Once again, the music streaming service challenges conventional wisdom by allowing employees to work from anywhere.…
Read more
Read all articles