How To Rapidly Scale A Mission-Driven Company Without Selling Out

"What if we don’t want return-hungry investors as shareholders in our company?" This is a question we often get asked, especially at flourishing start-ups. They are afraid that money motivated investors will harm their progressive, mission-driven companies. Are there other, more sustainable, investment options? Yes! Take the case of BuurtzorgT and Purpose Evergreen Capital. They show an alternative way to deal with investors. 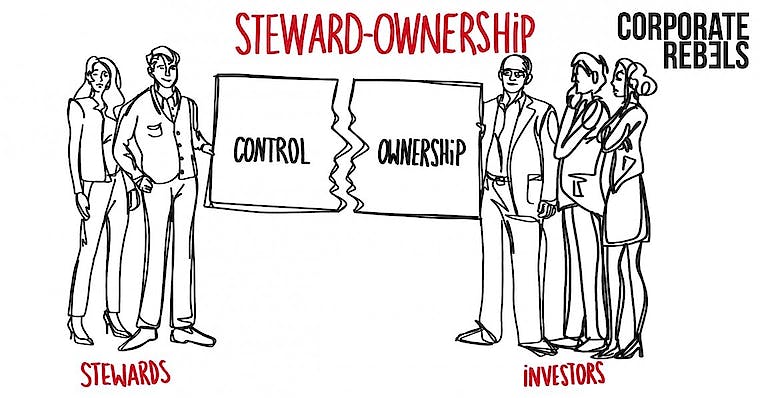 BuurtzorgT (not to be confused with Buurtzorg) is an independent mental health-care organization. It was founded by Jos de Blok (also founder of Buurtzorg) and Nico Moleman in 2013.

The autonomous teams at BuurtzorgT typically comprise a psychiatrist, a psychologist and five or six psychiatric nurses. Each team is responsible for mental health care in a dedicated region.

BuurtzorgT has been successful from the beginning, and is growing rapidly. In 2014, they had only 3 teams. Now, there are 40—all over The Netherlands.

Fast growth looks good, initially. But some companies get into trouble when they face cash-flow and working capital problems.

BuurtzorgT faced this problem. Their growth led to a chronic shortage of working capital, forcing the founders to search outside.

The search for money

But the founders were sceptical about taking on new investors. Why? Because, typically, investors invest money in exchange for some control over the business.

BuurtzorgT was especially wary of investors who not only want to make money on the loans but, ultimately, want to sell their shares for high returns.

The founders feared this could jeopardize their unique mission and principles. For founders with such scepticism there might be only one choice: don’t take investor money.

How To Rapidly Scale A Mission-Driven Company Without Selling Out

But the BuurtzorgT founders didn't like that choice. So they searched for an alternative—an investor not focussed primarily on high returns and who would allow them to stay mission-driven and independent.

In late 2019 they found such a partner—German investment company, Purpose Evergreen Capital.

Together with Purpose Evergreen the BuurtzorgT founders developed a novel and sustainable investment construct based on "steward-ownership", an alternative to the usual "shareholder-primacy ownership" model.

The sustainable investment construct developed by BuurtzorgT and Purpose Evergreen has (at least) four interesting principles:

In the steward-ownership model, shares are divided into two kinds:

The basic premise is that economic rights and control rights of the company can be separated, so ownership is in that sense redefined. Which means investors can only have part ownership of the shares, with the controlling shares held by the organization.

The organization’s controlling shares are held by 'stewards', whose goal is to serve and support the organization in pursuing its mission. They have formal control over the company, but no economic interest in profit maximization.

In the case of BuurtzorgT, they have issued and sold new ownership shares to their investor Purpose Evergreen Capital for a few million euro's. (The exact number is confidential). This means the investors have no say whatsoever over BuurtzorgT, and they cannot interfere in the business operations.

Besides separating the ownership and controlling shares, there is also a priority share ("golden share") issued to a foundation. This foundation then has special control over any amendment to the organization's articles of association.

The existence of this foundation with a golden share allows the mission to be dominant and leading. And with control held in a foundation, the organization can no longer just be bought or sold.

BuurtzorgT also has a golden share in the hands of a foundation. This foundation guards the mission of the organization and the rules of the games for both the stewards and the investors.

This guarantees the stewards will also have to act in the best interests of BuurtzorgT. They cannot do things that are in their own interest but run counter to the organization's mission.

Moreover, the golden share doesn't only prevent BuurtzorgT from losing sight of its mission. It also means the organization can never be sold to an investor who runs off with the profits.

In the case of BuurtzorgT, it is agreed that the organization will buy back Purpose Evergreen Capital's shares in a number of years (they expect in 5 to 7—depending on the growth rate of the organization). They also agreed to buy back the shares for the same price.

During these years, the investors are not allowed to sell their shares to another party. This means ownership shares must always return to the organization. So, once the loan has been repaid, BuurtzorgT will own itself again.

In this construct there are limited returns for the investors. There will be fair interest payments on the loan, but other wealth generated by the organization cannot be privatized by them. Instead, these profits should serve the mission of the organization, being reinvested or donated.

BuurtzorgT also pays interest to Purpose Evergreen Capital. This, however, is significantly lower than 10% (the exact number is confidential). They would have paid a typical private equity firm at least 12%.

Beside interest payments to the investors, all other money remains in BuurtzorgT to serve its mission.

The future of investing?

Is this construct developed by BuurtzorgT and Purpose Evergreen Capital the future of sustainable investing?

Written by Michele Rees-Jones
‘Blame’ is a loaded, negative word. But it’s a common reaction when something goes wrong. Some even look for people to blame. It shifts…
Read more
Nov 30, 2022
To Hell With Corporate Hierarchy Titles
Nov 30, 2022

Written by Joost Minnaar
Corporate hierarchy titles are like woolly mammoths—except they never went extinct. Is it not time for a fresh look at both hierarchy and…
Read more
Nov 19, 2022
Change Management As A Soft Skill
Nov 19, 2022

Written by Marc-Peter Pijper
We all believe a great school report deserves a tenner, right? Well, I disagree. Here's why I believe that. And how that translates to…
Read more
Read all articles