How A Small Company Used Consensus To Build A $50M Business

Maria Popova writes, “The history of the world is the history of telling others who and what we are—from tribal markings to national flags to family crests to pronoun-specifying email signatures.” How we choose to tell our stories—and what artifacts we choose to highlight—alters the way we hear our past, experience our present, and create our future. 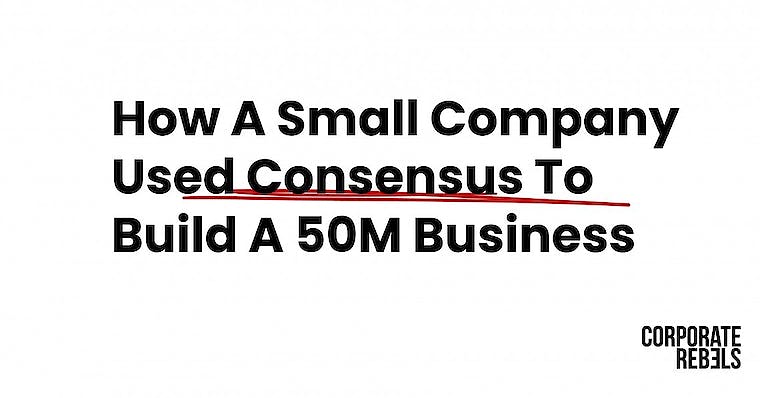 At Zingerman’s we have no flag, nor any sort of family crest, but we do have a whole host of deeply rooted beliefs, full-flavored foods, facts, philosophies, systems, and small seemingly insignificant symbols that ultimately come together to create what’s often called “the Zingerman’s story”.

Our consciousness is where the revolution begins

Although it rarely comes up when other people give their version of who we are, consensus is a pretty significant part of what has made Zingerman’s what it is today.

Because as Peter Block writes, “Our consciousness is where the revolution begins.” One day, it will get its due.

I’m waiting, I realize now that I write this, for the headline that goes something like: “How A Small Ann Arbor Company Used Consensus Decision-Making to Build A $50,000,000 Business.”

Most businesses begin the organizational lives with an informal “governance” that’s essentially a simple version of monarchy. The boss is akin to the king or queen. Most of us reading this would opt to be benevolent monarchs, but the power still resides with the “royal family”.

As we evolve and become more inclusive, many of us move into what’s called “consultative decision-making”—the boss still holds the power but at least listens to what others have to say.

For those who might want a more “democratic” path, most Americans and Europeans will, understandably, propose voting.

But my belief is that voting in our businesses is neither the only option we have to be more inclusive, nor is it necessarily the best. (To be clear, I am NOT saying I have a better way to run a country, and I absolutely cast my ballot this past fall.) Voting seems “natural” to most of us, but mostly because it’s how we grew up.

Consensus, by contrast, seems, at worst, kooky, and, at best, a quaint quirky way that Quakers and coops like to work.

I used to say that consensus was counter intuitive. But now I don’t believe it is. It’s just not the way we were conditioned as kids. But having spent the last 25 years working with it, I will say with confidence that anyone who’s interested can certainly learn it.

What’s the benefit of consensus? We get better outcomes, learn to act as peers, not as parents or children.

Getting past power imbalance

All the way back in 1994, my partner Paul and I wrote a six-page long vision called “Zingerman’s 2009” (it’s in the back of Part 1 of Zingerman’s Guide to Good Leading) which described a Community of Businesses, all located here in the Ann Arbor area.

Each would be a Zingerman’s business but would still have its own unique specialty. All would work collaboratively, as a single, synergistic, interconnected organization with semi-autonomous businesses within it. The vision called for having managing partners in each business.

Back then the managing partners always held a minority share in the business, (that’s changed today but, I’ll save that for another story). Which posed a concern: “Why would anyone want to come into a business to be the managing partner if you and Paul can just outvote them any time they don’t agree with you?”

It was a fair question. We proposed to get past this power imbalance by committing, in advance, to using consensus. Since Paul and I had always worked as equals, we decided to simply carry that forward. “You may only own 20 percent of the business,” we offered, “but we’re going to use the consensus process at the partner-level, so you have the same say in decisions we do.”

It was, I believe, a better way to go for all involved. As 19th century anarchist geographer Elisée Reclus wrote, “Between equals, the task is more difficult but also more exalted”.

For clarity, consensus at the partner level inside a business is implicit. The partners don't call me or Paul to ask permission to raise a price or roll out a new product.

But as Maggie Bayless of ZingTrain says, “If I felt like in my gut that either Paul or Ari wasn’t going to like what I was doing, then I knew I’d better pick up the phone and talk to them about it before I did it.

That move, alone, was a lot. But then we put forward a second, maybe even more radical, proposal.

We would govern the entire Zingerman’s Community—not by fiat of the founders, but by consensus of all the managing partners, plus me and Paul. We called it the Partners Group.

Back in 1994 I think there were five people in the group. Today there are something like 22. It remains, 26 years later, the place where big organization-wide decisions are made to this day.

Six years ago, we added the what we call Staff Partners (more about this in another upcoming post). We do not, it’s important to say, make every organizational decision at the Partners Group.

To the contrary, 95 percent of what we decide is done in the businesses. But BIG decisions like opening a new business, approving a new partner, changing organization-wide benefits, how to respond to randomly occurring pandemics, etc. would be made at the Partners Group.

When we started this, we also proposed that when partners made these sorts of decisions at the Partners Group level, we would commit to always acting in the best interest of the whole organization, even if that decision was NOT the best decision for the partner’s own business.

While you could and should share your thoughts, beliefs, concerns, and questions during a meeting from any number of different angles, in the end, our commitment was to always make those decisions with the Community of Businesses’ best interests in mind.

What does that really mean in practice? At Zingerman’s we say that we’ve reached consensus when: “Each individual in the group is at least 80 percent satisfied with the wording of a decision or statement, and will actively support it 100 percent and live by the decision.”

Some group members may be enthusiastic about a particular proposal, while others are indifferent but still willing to move forward. But all of us make a conscious and overt choice to commit to making whatever we decide in this way into an effective reality. Because everyone has the same formal say, it radically alters—I believe for the better—the power equation in the group.

Misconceptions of consensus decision-making are all too common. Margaret Thatcher once declared that, “Consensus is the absence of leadership.” I couldn’t disagree more strongly.

Working with consensus actually demands more effective leadership. Committing to consensus has challenged me to grow (ever imperfectly) as a leader in ways that would never have come up had Paul and I simply stayed on as a couple of benevolent, caring, and compassionate “kings”.

One thing that’s critical to using consensus decision-making is effective facilitation work. We’re fortunate to have a really skilled group of in-house facilitators (they all have other primary jobs—this is just their side gig) who do really strong work to keep us on task and using good processes.

The drama is on the voting

While command and control require only a boss who’s willing to give orders, consensus requires a whole lot more rigor. It also flips the dramatic script that groups go through. In an electoral system, as we’re all painfully aware right now, the drama is on the voting.

“Command decision making” generally means the drama will come after a decision is announced. With a consensus process, the conversations—which may still be challenging—are happening before, and during, a decision-making meeting.

By the time we call for a decision, there’s little drama. We know who stands where. And afterwards? It’s usually calm, since there’s rarely a need for an emotional “meeting after the meeting.”

Does consensus always work well? No system is human-proof. Consensus can’t totally keep us from being passive aggressive or from disengaging emotionally.

How A Small Company Used Consensus Decision-Making To Build A $50,000,000 Business

What’s the benefit of using consensus? We get better outcomes. We learn to act as peers, not as parents or children. We model the equity we say we want in society. We reward collaboration and innovation. We drive ourselves towards humility.

And as Peter Block says, “Each person is responsible for outcomes and the current situation... the outcomes and quality of cooperation... are everyone’s responsibility.”

This is a guest post from Ari Weinzweig, CEO and co-founding partner of Zingerman's Community of Businesses. For more information on Ari and the company, check out his rebel page.

Written by Ari Weinzweig
I'm the co-founding partner of the Zingerman's community.
@zingermans
Share or join the discussion!
Our newsletter
Are you ready for more revolutionary content?
You can follow us on social media

Written by Pim de Morree
I'm proud of a lot of things our team has done over the years. But, there's one thing that truly stands out. Big time. So, what is it? It's…
Read more
Read all articles