Home Blog We Challenge You: Give Up Your Status Symbols

We Challenge You: Give Up Your Status Symbols

The world of work is not what is was one hundred years ago. In some ways, that is. But some of the ways we work are painfully similar to 19th century workplaces. Take, for example, status symbols. That we still have those in today's workplaces is not just dumb, it's bloody embarrassing. 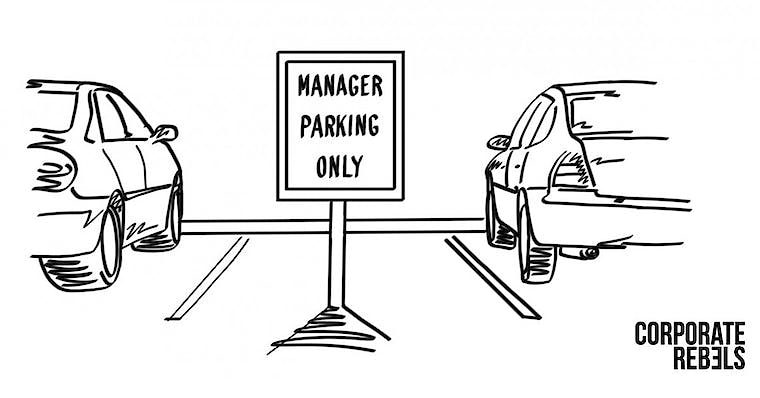 Many leftovers of 19th century command-and-control styles of working don't make any sense. But some organizations cling to them like a lifeline.

To name a few: time clocks to control how many hours we spend at work each day, the abundance of stifling hierarchies, the separation of thinking (at the ‘top’ of the pyramid) and doing (at the ‘bottom’), and the fact that people with the most decision power are often the farthest away from the actual work.

But arguably the most embarrassing leftovers are the numerous symbols that reflect inequality in the workplace. Think about parking spots reserved for directors. How about the luxurious corner offices that separate managers from their team? Or the top floors for directors? With fancier carpet and expensive art? Or inflated job titles showing who's important and who's not?

Keeping these in place is a pretty shortsighted thing to do. The symbols create barriers between leaders and employees. They strengthen the hierarchy, make people afraid to speak up, reduce transparency and block the flow of information.

Oh, and in most cases, they demolish trust in leadership. Meanwhile leaders state in annual reports and at company meetings that "People are our most important asset.". But the status symbols say the exact opposite. So, while everyone passes your reserved parking spot on their way into the office, they probably think you're just full of shit.

Why would you lock yourself away in your office because of seniority? Doesn’t it make more sense to be among your team members, as their leader, to know what’s going on, and more available to help them?

“Yes!’’ says Harvard Professor Francesca Gino. She shows that managers who lock themselves away enjoy less respect from their employees. There is much higher appreciation of those who are close to the team and who know what is going on. Indeed, she found that “the most respected leaders are those most willing to get their hands dirty”.

Robert Townsend, former CEO of Avis, once famously said: “Once you’re in charge, remove everything you didn’t like as a subordinate and implement what you missed.”

For many, this is easier said than done.

In our talks and workshops around the world we often address this controversial (for many) topic. We urge leaders to follow the lead of progressive leaders we've met by giving up their status symbols. This often leads to interesting discussions!

In some sessions, people promise to give up some sort of status symbol (mostly their personal office or parking space). But the vast majority is not eager to let go of 'hard-earned' privilege.

Once you’re in charge, remove everything you didn’t like as a subordinate and implement what you missed.

But, because every single person who takes part in destroying the ivory tower is a small win, we are now going to address you. Yes, that's right, you: the reader of this post.

Our blog is read in 100+ countries by tens of thousands of people every month. If everyone who reads this removed their status symbols, the world of work would look slightly better.

Be the change you seek

We challenge you. Give up your status symbols! Be bold, be brave, and be the change you wish to see. While you're at it, invite those around you to join.

We challenge you. Give up your status symbols! Be bold, be brave, and be the change you wish to see.

There's not a single person that has the power to change the world of work. We all need to act together.

Reply to this post and let others know which status symbol you will give up. And be aware: not getting rid of your status symbols is also a decision.