"We’re All Leaders” Is A Better Way To Work

One of the most radical of all our approaches at Zingerman’s, we ask everyone in the organization, from the minute they start working with us, regardless of job title, age, seniority or spot on the org chart, to take responsibility for leadership. That’s right—you might be a busboy working part time on your second week, and yet we still expect you and count on you to think and act like a leader! 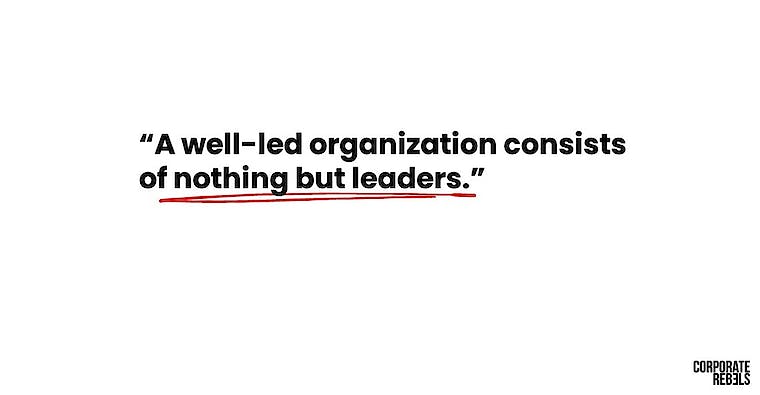 Sure, like every other good-sized business, we have an org chart and a whole lineup of supervisors, managers, partners, and the like. But the bottom line is that leadership isn’t limited to just those who happen to have a title.

Being a great leader requires no title and no particular experience. No one necessarily appoints a leader. Leaders don’t have to have any particular set of responsibilities, they may not have business cards or even a computer, and they’re often invisible on org charts.

There’s no age requirement. While education can help, it hardly counts for anything if what you learned in the classroom isn’t applied in a constructive way.

So although leadership is most often associated with power and hierarchy, the truth is that it’s not all that connected to either. In fact, the only thing that truly gets you into the ranks of leaders is the decision to lead combined with the ability to actually start leading.

Encouraging everyone to lead

Much earlier in our organizational history, we had asked everyone at Zingerman’s to take responsibility for the quality of our service. In the mid-90s, we expanded that responsibility to include finance, which we made come alive through Open Book Management.

At first, the idea of applying this same sense of equity and inclusion in leadership thinking seemed strange, but the more I thought about it, the more it seemed the “obvious” answer.

All these years later, we have made a great deal of progress. Leadership thinking is spread far more widely through our organization of over 700 staff members, 18 managing partners (and over 200 staff members who own a share in the business).

That said, of course, we still have work to do to make this our daily reality. If we do it well, we will meet the challenge that Peter Koestenbaum put forward: “A well-led organization consists of nothing but leaders.”

What does this mean in real life practice? In the day-to-day, we want an organization in which a new busser wiping down a table will also be giving thought to the impact of their action on the whole organization. Where a staff member working the counter understands that if they overhear a customer expressing a concern, we want them to gently jump in to turn things around.

A place where everyone realizes that helping to make decisions about our organizational benefits plan or to comment on business trends is an important part of their work. A workplace where everyone knows not to settle for so-so, but, rather, to push ourselves to “do the right thing”.

So although leadership is most often associated with power and hierarchy, the truth is that it’s not all that connected to either.

The organizational equivalent of climate change

Rather than teaching front line folks to think like leaders, most organizations train them merely to “do their job”—to play their proper, much more narrowly defined role in the company. Direction and decision-making in that model come from the top, from the people whose “job” it is “to think” and make decisions. Everyone else follows orders. Leadership in that setting, is “someone else’s job.”

Whether it’s in business, in non-profits, or in countries, I will suggest that this old model—in which decision-makers are different from doers—does not work well. While it may appear to function for a while, in the long run, it is neither a healthy nor a holistic way to work.

Folks on the front lines focus on getting by rather than going for greatness. Over time, excellence and energy erode, slowly but surely causing the organizational equivalent of climate change. Cracks in the culture begin to appear, crises come with ever greater frequency, and coming up with solutions becomes more and more of a struggle.

This is also, I would suggest, what is still happening in the majority of American companies. You can also see this mindset at work right now in Russian army that has attacked Ukraine.

Instill a leadership mindset in every employee

My seemingly subversive belief is that our work is to invert this ineffective approach. Rather than reserving leadership for a select few, let’s assign to everyone, across the board. I’m totally responsible for leadership; and so is the new bookkeeper, the part time baker and the night cleaner.

My strongly held belief is that we do not need to operate our organizations with a single strong all-powerful leader perched precariously at the top of a pyramid or power operating in politically-minded ways. Instead we can create a setting in which everyone is expected to think and act like a leader.

Can this work? Commonly held beliefs in most companies would say “no!” Many would argue that having “too many bosses” will inevitably create chaos. It’s often, inaccurately, called “anarchy.” Ironically, the idea that everyone thinks and acts like a caring collaborative leader is exactly what anarchism is all about. Anarchism, despite the popular misconception, is all about organization.

When we do get people to think like leaders, to engage in the difficult work of collaboratively figuring out the right things to do, they begin to choose freely to participate in creating the organization of their future.

Does that mean everyone gets to just do what they want?

No, of course not. In this holistic and inclusive model of leadership, no one just “gets their way.” Not me, not Paul, not any of the other partners, not the new person we hired last Wednesday. This is about creating a caring collaboration of leaders, not about lapsing into chaos.

What everyone in the organization gets when we work this way is a chance to have a meaningful say in the organization of which we’re a part. And in the process, we gain access to a hugely positive font of personal energy that comes from making free choices the way any good leader would do.

To make this switch happen we use the “Five Steps to Building an Organizational Culture”:

1. Teach it – Leadership, we know, is not innate; it needs to be taught. Back around the time we opened the Deli in the early ’80s, anarchist Howard Ehrlich wrote, “The process of empowering people in an organization requires a formal program of education.”

We need, in that spirit, to teach leadership to everyone. Do we get it right all the time? Of course not. We do work at it, though. All of our leadership classes are open to everyone who works here.

2. Define it – Make the case for an organization in which everyone is expected, from day one, to take responsibility for leadership. Leaders, in this context, are people who care about the collective and act caringly; people who focus on serving the ecosystem, not their egos; people who, rather than just complaining, are willing to speak up and seek creative, constructive outcomes; visionaries, not vigilantes.

3. Live it – Formally we work to spread leadership thinking with systems like open book management, Bottom Line Change (our very inclusive organizational change process), Lean, etc. It’s embedded in Stewardship and supported by Servant Leadership, as well as our commitment to having Staff Partners as part of the group that runs the Zingerman’s by consensus.

Less formally, we can do this in small but meaningful ways through casual conversations and to encourage folks to speak up, share ideas and concerns (awkward though it may feel) and take initiative to lead change. In the spirit of everyone taking full responsibility, “Living It” requires those without formal authority to engage as leaders.

4. Measure it – While I know we can do better in this, we do have a number of indirect measures. The number of people who come to huddles and the frequency with which people initiate are all factors. Front-line staff who participate on our cross-business committees upholding customer service standards, initiate Bottom Line Change, implementing safety programs, supporting sustainability innovations, etc.

5. Reward it - It’s important to be actively recognizing and rewarding those who step forward as positive leaders. This works best when it’s a combination of both formal and informal recognition. Rather than just reacting to the people who take potshots or critique without suggesting constructive alternatives, we can better turn our attention to the folks who (regardless of job title or formal authority) are willing to speak up, make suggestions, and help do the hard work to make meaningful change happen.

Don’t underestimate your impact. Even small acts of appreciation can make a meaningful difference for someone who’s never before been in a leadership role.

Instill a leadership mindset in every employee.

Speaking up, sharing hopes and dreams, asking awkward questions in an organization of which you’re “just a small part” or a “new person” do make a meaningful difference.

They are powerfully effective acts of leadership coming from people who are clearly not in charge.

As Hamel and Zanini share, “When ‘ordinary’ employees are given the chance to learn, grow, and contribute, they’ll achieve extraordinary results.”

This post is adapted from ”We are all leaders” about Ari’s newly-released pamphlet of Secret #22.

Written by Ari Weinzweig
I'm the co-founding partner of the Zingerman's community.
@zingermans
Share or join the discussion!
Our newsletter
Are you ready for more revolutionary content?
You can follow us on social media