Beware: This Hippo Kills Your Company!

Many traditional workplaces are threatened by HiPPOs. We’re not talking about big animals here. We are talking about HiPPO as the acronym for Highest Paid Person’s Opinion.

What does this mean? It means decisions are often made by deferring to the opinion of the person with the highest pay grade. Simply, we tend to overlook the content of an issue to please the most senior person in the room.

This is the HiPPO effect. And it causes real harm.

A study at the Rotterdam School of Management found that projects led by junior managers had a higher success rate than those led by more senior ones.

A study at the Rotterdam School of Management found that projects led by junior managers had a higher success rate than those led by more senior ones.

The consequence was that projects didn’t benefit from this additional input. Simply put: organizations are vulnerable to the stupidity of senior staff.

What makes the HiPPO effect tough to beat is in our very nature. Humans have a “tendency to attribute greater accuracy to the opinion of an authority figure, and to be more influenced by that opinion”. This is called authority bias.

The famous Milgram experiment (1961) demonstrated this. It measured “the willingness of participants to obey an authority figure who instructed them to perform acts conflicting with their personal conscience”. The acts involved administering electric shocks to others.

The strength of the shocks was increased to such a level that, had they been real, would have been fatal. Nevertheless, a very high proportion (65%) of participants obeyed the instructions! Similar studies yield similar results.

Recognising this is why organizations should deliberately reduce the power of HiPPOs. Progressive organizations find ways do just this. 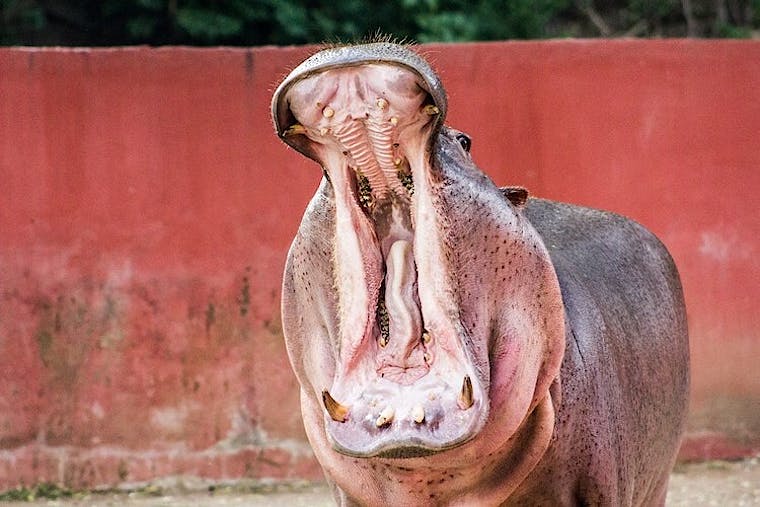 In many workplaces, employees fear the possible consequences of criticizing senior staff.

Displaying warning signs is one way to address the issue. They increase awareness of the HiPPO effect, and make it more comfortable for people to speak up.

At the British National Health Service (NHS) someone suggested a similar idea. They tried signs on the doors of meeting rooms: “Park hierarchy at the door”. In only a few days, employees felt more confident speaking up, even challenging, more senior leaders. According to one: “We focused much more on the actual content, and less on who it came from.”

Create a ‘press conference’ setting where leaders can be questioned as if they were in front of journalists. It’s a powerful way for leaders to allow others to voice criticisms and ask questions.

Inside the office of British broadcaster UKTV a black box with a white question mark is attached to one of the walls. The box is a way to “ask unasked questions”. Anyone can ask an anonymous question of the CEO and leadership team. They simply put it in the box.

During the weekly town hall meeting, CEO Darren Childs opens the box, reads questions out loud and answers them on the spot. Darren: “It increases transparency and accountability for management. It not only sends a clear signal to everyone that we promote transparency, it also helps people to ask questions that are often left unasked”.

Every Friday afternoon, Google holds their famous TGIF (Thank God It’s Friday) meeting. These meetings involve some crucial aspects. (1) All employees can join (in person or through a live stream). (2) Senior management (usually including one of the founders) shares important information. (3) There’s an open Q&A.

The Q&A is an ESPECIALLY important part. Employees can send in questions via Google Moderator. Others vote for the questions they want to hear answered. The most popular ones are answered on the spot. Once again, this is a powerful way to invite people to question the leadership group.

In many workplaces, employees fear the consequences of criticizing senior staff. This reticence is even stronger when big groups meet. To speak up is to be in-the-spotlight. Which is why some companies use practices that make it easier for people to speak up.

For example, you can encourage employees to first discuss their concerns or criticisms in small groups. Allow time for this. Then invite a spokesperson to share their thoughts. Because the ideas come from the group, it’s easier to speak up.

Try and fail, but don't fail to try

The HiPPO effect is a problem in many traditional workplaces. It ignores the wisdom of the crowd, neglects the knowledge of front-line staff, and potentially disengages the workforce. It’s a clear sign of directive leadership, something that progressive organizations deliberately try to avoid.

The hippo is an important problem in many traditional workplaces. It ignores the wisdom of the crowd, neglects the knowledge of front-line staff, and potentially disengages the workforce.

More supportive leadership cultures experiment energetically with practices that break down traditional ways of working. It’s not about copy-pasting the above. It’s about finding the ways that suit your particular organization. And then, try, fail, learn, and succeed.

And try to avoid the dangerous HiPPO.