Fixed salary bands, labour market data and negotiations – all are in the traditional compensation mix, and companies are reluctant to change. But what happens when responsibilities change? When people work in agile teams? When traditional hierarchies no longer exist? And employees are less satisfied with their compensation? New Pay could be an answer.

The Capuchin monkey gets really pissed off if the colleague next door gets a grape instead of a dull cucumber in exchange for a little stone! If both were satisfied with a cucumber, this could continue. But now there’s a double standard. Fairness experiments by Frans de Waal show vividly that primates (as well as humans) have a strong sense of justice. We compare our wages with others. If the comparison reveals disadvantage, this can lead to extremely defensive reactions.

But in practice, tasks in companies are more complex. Comparison is not always easy. Nevertheless, perceptions of justice and fairness are central to good remuneration systems – both in processes and amounts. Some employers simply prefer to not talk about salaries – ignorance is bliss, they hope. This means remuneration systems can be in place for a long time. A small percentage of dissatisfied people has usually been manageable so far.

Why we need New Pay

But the old way is increasingly risky. There are changes in the world of work that influence perceived fairness of remuneration:

Labour market change: The market is changing in response to local employee preferences and the redefinition of competence (graduates without practical knowledge versus dropouts with suitable skills).

Social change: Freedom of scope, flexibility, and more time for private life are more important as rewards. “New Work”, and agile work, are other currencies in the pay mix.

New Work and agile work: When hierarchies flatten and leadership is shared, rigid systems can’t cope. Employees more frequently question what managers are paid for, and whether existing ranges are justified. The manager as sole authority for assessing employees appears less acceptable in this setting. 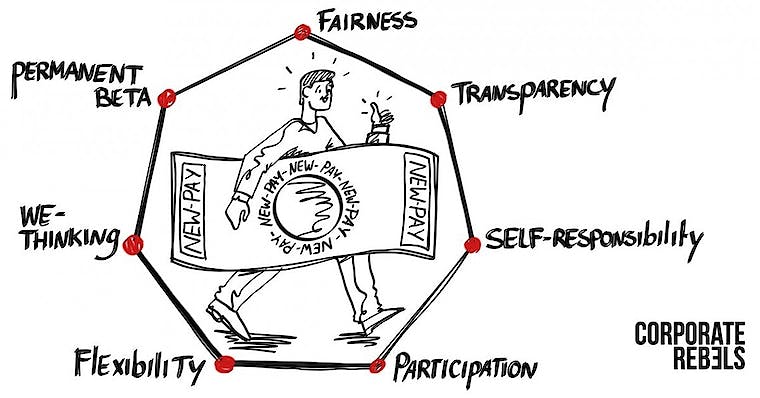 The seven dimensions of New Pay

Given this background, more frequent and radical adjustments to remuneration appear inevitable. We (a trio of authors), call this "New Pay". It is not a concrete model, but the search for a system that fits with one's corporate culture and does justice to the environment and current values. The aim? To find a solution for one's own organisation that is repeatedly checked for coherence at via suitable negotiation processes.

In practice, the following principles play a particularly important role:

3. Self-responsibility: One’s own salary can be determined by oneself, and recognises any new distribution of leadership

5. Flexibility: Time is money; and free time, flexibility and freedom of choice are part of the remuneration

6. We-Thinking: Alternative incentives that recognise the purpose of the company replace rigid bonuses, and sensible work becomes part of remuneration

7. Permanent beta: Salary models are always in transition and open to change

Using these dimensions as indicators for New Pay, we currently see 18 different approaches, from standard salary approaches, to transparent salary negotiations, to salary formulae and to employees self-setting salary. Generally, organisations only begin to change when they feel urgency. Some examples illustrate some of the frequent triggers and steps in New Pay.

1. From the Art of Negotiation to Transparency

Many companies come across New Pay after years of paying by a hunch process, which can lead to severe imbalances. This happened at internet service provider Seibert Media, which employs 170 people. Martin Seibert founded the company in 1996 and acted according to the old merchant rule "The profit lies in purchasing" when it came to salaries. He tried to tickle the lowest pain threshold out of applicants during salary negotiations. But with agile working methods like Scrum, and team recruiting practised in the company, a more transparent solution was needed.

But the salary structure simply did not meet the requirements of fairness. "We had absolute high performers who worked for us dirt cheap", as the managing director described the problem. So, the shareholders made a far-reaching decision: Employees who received little compared to their colleagues received a significant increase. But the discrepancy could not be financed with one large increase. It took three years to straighten this "leaning tower". It was only because of this change that the current model with "salary checkers" could be created. A circle of elected employees has insight into all salaries. Proposals for salary changes coming from teams or employees themselves are compared, and then distributed using the available budget. The salary checkers take economic feasibility into account and accept responsibility for the results. So not all employees deal with the topic – which saves resources. However, everyone needs to take some action to get a salary increase.

Poor values in employee surveys led Elobau to rethink their salary setting. This family-run foundation company has around 850 employees worldwide. They manufacture sensors for mechanical engineering and vehicle systems for the commercial vehicle sector. They are based in Leutkirch in the Allgäu region of Germany. They opted for a participatory approach. Managers worked with employees to develop a new solution. 56 volunteers registered and joined teams at all hierarchical levels. In the core team of 14, the initial objective was to create a space free of fear, and in which team members could openly address issues. As they developed, processes such as design thinking and prototyping were used, and proposals involved an ever broader basis of approval.

Not every company has the time for this, but the result was worthwhile: At elobau, the participative approach earned high acceptance for the new solution. In addition to a monthly salary (fixed annually with the manager), the final model contains an “FMK component” (based on evaluation of each other, cooperation and customer orientation). There was also a bonus for quality and delivery reliability, and an annual success bonus of the same amount for all employees.

Greater employee participation and decision-making freedom are now also having a wider impact in the company. Human Resources Manager, Norbert Christlbauer, and his team have been practicing new ways of working ever since. A lively exchange with employees is important to him. He wants to promote more openness. "I am no longer a classic HR specialist. My view of the world has radically changed with the salary project." That shows. New compensation systems shape corporate culture; and culture affects New Pay and vice versa.

"Make a wish!" is the motto of communications consultancy Wigwam eG. Each of the ~20 employees indicate what he or she would like to earn. No more long salary negotiations. No more discussions about relevant criteria. This solution is attractive because of its simplicity. The whole thing works in a similar way to the "Corporate Rebels": Everyone adds their desired salary transparently to an Excel spreadsheet.

When the self-set salary was introduced a year ago, the sum of the desired salaries was 15 percent above the budget. So, they regulated the transition to the new model step-by-step. If the economic situation allows more money to be spent on salaries, each member has his/her salary raised by five percent. Meanwhile, the agency is paying the original desired salaries. This shows a great advantage of the system: employees have a high interest in achieving their desired and self-set salary.

But after one year, the agency realised this structure had not yet led to general satisfaction. "If someone made a wish five years ago and never increased his desired salary and then we add new people who get more, that can lead to dissatisfaction.", says Johannes Göring, who takes care of internal communication at Wigwam. That's why the agency also built in some calculation mechanisms to compensate for such developments. Assuming Wigwam has earned 5,000 euros more to put into the salary budget, the agency then splits the remuneration pot: one half, in this case 2,500 euros, is distributed to all according to their desired salaries. The other half ends up with those "Wigwams" who have adjusted their salaries. So even those who did not adjust their desired salary get a little more. The salary algorithm is now more complex due to this small change – and is no longer so easy to understand even for their own employees.

But Bosch has not reached the end of the line with collective bonuses. For agile units in the collective bargaining sector, a new remuneration system, agreed with the trade union IG Metall, recently came into effect. It comprises ten grading groups with a high degree of permeability. For the first time, employees will be able to make a self-assessment. Such collective agreements do not yet fully reflect the degree of agility with which the teams are now working. In an interview with the “Personalmagazin”, Uwe Schirmer, responsible for fundamental personnel issues such as remuneration at Bosch, says the ideal solution has not yet been found. "If you have a team with a high level of trust, in which everyone does more or less the same thing, then you could think about a much rougher system, right down to the same salary for all team members," he says.

New Pay Journey: The Search for Fairness is not a Walk in the Park

We are seeing similar developments in other organisations. Now that the art of negotiation offers little added value for organisations, bilateral salary negotiations in New Pay usually take a back seat to multilateral evaluation rounds. The manager’s feedback is detached from the payment. Many employees consider this to be fair.

New negotiation processes will be needed more frequently in the future due to the dynamics of the working world. System logic now meets psychology. Every employee must weigh meaningful values for the company against the advantages and disadvantages for his or her personal situation. At least in Germany, very few employees are used to talking openly about such considerations.

One thing is clear: no system is perfect—it's just what fits the culture better than another. Many approaches still lack empirical values. System changes do not always immediately achieve the desired effect. It is important to make decisions, evaluate changes in good time and make further adjustments as necessary.

New Pay has only just begun.

This guestblog is written by Stefanie Hornung, Nadine Nobile and Sven Franke

Written by Stefanie Hornung
Journalist (Freelance) & Author on New Management, New Pay & Diversity
Connect @st_hornung
Share or join the discussion!
Our newsletter
Are you ready for more revolutionary content?
You can follow us on social media

Written by Pim de Morree
One of the main principles we rely on at Corporate Rebels is radical transparency. And what better way to live up to that than to share our…
Read more
Nov 30, 2022
Should You Let Employees Set Their Own Salary?
Nov 30, 2022

Written by Joost Minnaar
When this year started, your salary was probably worth more than it is now. Although you’re still making the same amount of money, it’s…
Read more
Oct 22, 2022
Organizing Based On Algorithms And Smart Contracts
Oct 22, 2022

Written by Alex Hirst
Conversations between ‘Corporate Rebels’ like us inevitably end up taking the same line of personal enquiry. What was it that made you…
Read more
Sep 21, 2022
Why You Should Separate Salary And Performance
Sep 21, 2022

Written by Marc-Peter Pijper
We all believe a great school report deserves a tenner, right? Well, I disagree. Here's why I believe that. And how that translates to…
Read more
Jul 09, 2022
Limited or Unlimited Vacation Time?
Jul 09, 2022

Written by Pim de Morree
Here at Corporate Rebels, we value freedom at work. A lot. It's up to everyone to decide for themselves when and where they work. We don't…
Read more
Read all articles