So, I recently came across an old tweet of Jurgen Appelo, in which he asks: "Apart from Holacracy, the "Spotify model" and Liquid Organization, what other frameworks/models do you know for adaptable org structures?" It made me reflect on all the different "adaptable organizational structures" we've come across over the last years. Here is the (not so exhaustive) list I managed to come up with.... for now. 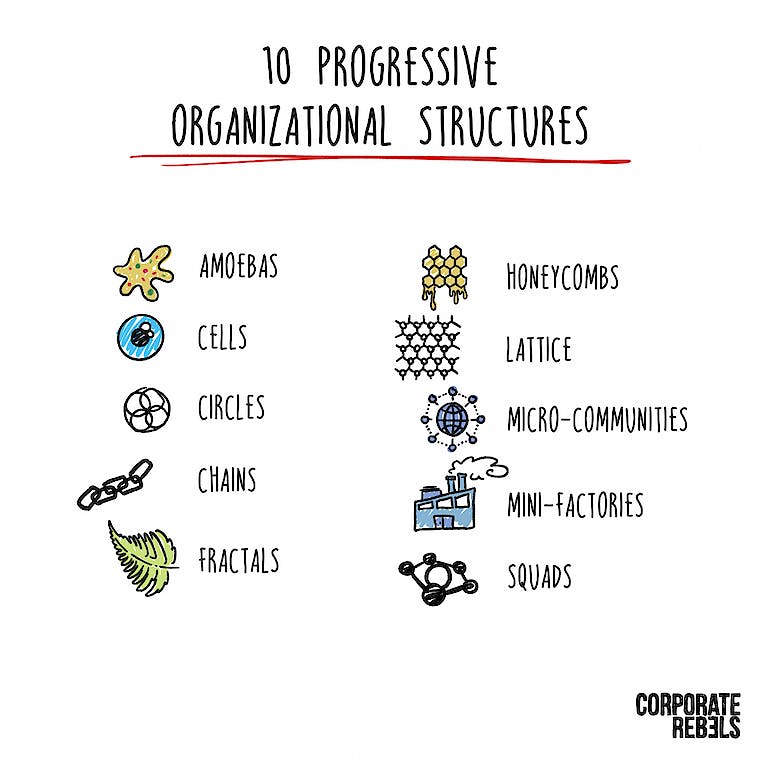 10 Progressive Organizational Structures (and Their Companies)

To keep things a bit more manageable, I've only listed the progressive organizational structures that are rooted in practice.

I managed to come up with at least 10 main ones. And here we go.

Let's start with a golden oldie: the amoeba model, as developed at Kyocera.

The units can consist of about 5 to 50 people, and all have a clear goal of making a profit for itself. Every member of the unit is supposed to play a major role in achieving profitability and voluntarily participates in managing its own unit.

Another golden oldie: the cell model, as developed at BSO/Origin.

BSO/Origin was founded in 1973 in the Netherlands by Eckart Wintzen as an IT company. In the 20 years that followed, the company grew to employ around 10,000 people across 75 cities in 20 different countries.

The company’s structure was based entirely of self-managing units — internally dubbed as cells — that would divide itself after growing to a certain size. The entrepreneurial cells were divided based on geographical areas. There was almost no headquarters, nor people serving in staff functions.

Although BSO/Origin doesn't exist anymore (it was later acquired by Philips), the cells model is still practiced by several other Dutch companies, including Finext, Rebel Group, and, perhaps most notably, Buurtzorg.

Buurtzorg was founded in the Netherlands in 2006 by Jos de Blok as a home-care organization. The company currently employs 10,000 nurses and is now the Netherlands’ largest provider of home-care — and the only one that provides nationwide coverage.

Buurtzorg's model seems highly inspired by the cells model of Wintzen. The company is structured around more than 1,000 self-managing teams, with a maximum of 12 team members responsible for their own geographical area.

These highly entrepreneurial teams are supported by only about 50 people at the company's headquarter and around 25 coaches.

Yet another golden oldie: the sociocractic model, as developed at Endenburg.

The sociocratic model was developed by Gerard Endenburg in the mid-1960s when he became general manager of his family's Dutch engineering company, Edenburg Elektrotechniek BV.

In more recent years, Endenburg's model has been further developed into derivatives like S3 and Holacracy. Holacracy itself has its own derivatives, mostly developed by companies that went beyond Holacracy, like Bol.com's Spark model.

Bol.com, a Dutch e-commerce company, has adapted the original Holacracy model towards their own Spark model (still with circles and consent decision-making) to fit it into their larger hierarchical organization.

Here's a newer one: the ner model, as developed at Irizar.

The ner model was developed by Koldo Saratxaga in the 1990s when he led the Basque luxury coach manufacturer Irizar from near bankruptcy into one of the world's most renowned in the industry.

The ner model advocates for companies to be organized as a chain of multidisciplinary self-managing teams (for all business functions) that collaborate with each other based on a business rhythm of commitments.

After his time at Irizar, Saratxaga started his own consulting company that helped to transform over 100 organizations towards the ner model, of which 20 went on to form the ner Group.

Another golden oldie that has disappeared: the chaordic model, as developed at VISA.

The chaordic model was developed by Dee Hock when he founded the VISA organization in the early 1970s. Hock grew the VISA into the world's largest credit card organization, owned by its 16,600 members.

To achieve all of this, VISA structured itself as a self-organizing and self-governing network of thousands of autonomous businesses to create an environment in which member banks could both compete and cooperate. This structure resembled a fractal structure, as found in nature.

The fractal structure was designed in such a way that it had to balance the interests and powers of all members, regardless of their size or location. It also had to ensure that no single member or person could dominate the whole organization.

VISA eventually abandoned the fractal structure when it restructured itself into a more traditional company before going public in 2008.

Yes, yet another golden oldie that has disappeared: the honeycomb model, as developed at AES.

AES is an American-based company co-founded by Dennis Bakke in 1981 that became the world’s largest independent power producer.

Under his leadership, Bakke divided a company with over 30,000 employees into a unique decentralized structure, describing its plant structures as honeycombs.

The honeycombs were built up by entrepreneurial teams of around 10 to 20 individuals, including a team leader, that would work on a specific function in a power plant. The team leaders reported to the leader of the power plant, who then reported directly to the CEO.

The company had only 100 staff in its headquarters, but no central maintenance or safety departments, no purchasing, no HR, and no internal audit departments. Instead, AES, in a heavily regulated industry, relied on the use of 80/20 voluntary task forces to deal with typical staff functions.

Just like VISA, AES eventually reverted to more conventional management approaches. This happened when the company was handed over to new management in 2001.

Finally, a golden oldie that still exists: the lattice model, as developed by W.L. Gore.

W.L. Gore & Associates is an American manufacturing company founded in 1958 by Bill and Vieve Gore and is most famous for its Gore-Tex material.

W.L. Gore structured its 10,000 employees into what they call a lattice, as it resembles the lattice concept used in architecture and crafts, referring to intertwined materials.

In an organizational lattice, there is no fixed or assigned authority, which makes all individual autonomous.

In this system of intertwined entrepreneurial individuals, the company relies heavily on direct person-to-person communication and natural leadership of individuals defined by voluntary followership.

Here's the most recent one: the Rendanheyi model, as developed by Haier.

Haier, is one of the world’s largest appliance producers. Led by former CEO Zhang Ruimin, they have developed their own progressive management model over the last 20 years known as Rendanheyi.

The company structures its 80,000 employees in around 4,000 self-managing, highly entrepreneurial units, internally dubbed as micro-enterprises.

The self-managing units manage their own P&L, hire and fire their own members, and decide which other micro-enterprises to collaborate with to form micro-communities that are based on internal market dynamics.

There are also companies that have blended Rendanheyi with another existing model to create their own unique organizational model, such as American e-commerce company Zappos.

Surprise. Yet another golden oldie no longer with us: the mini-factory model, as developed at FAVI.

FAVI is a French SME manufacturer of copper rotors and gearbox forks for cars. While under the leadership of ex-CEO Jean-Francois Zobrist, the company featured a progressive management model.

At that time, the company was organized into 21 self-managing teams of 15 to 35 people. These highly entrepreneurial teams were organized around a specific customer and were internally dubbed as mini-factories.

Following Zobrist's departure in 2009, the organization returned to more traditional modes of management.

At last, perhaps the most famous of all: the Spotify model.

Spotify, the Swedish music streaming service, shared many years ago how they had organized their company around self-managing teams called squads , each optimized for maximum autonomy.

These squads were designed to act as mini-startups, featuring all the skills needed to deliver a certain service or product. The model also featured other exotic concepts like Tribes, Chapters, and Guilds.

However, it remains a mystery if Spotify ever fully implemented their own model themselves.

As I said earlier, this is by no means an exhaustive list.

I could easily think of about 10 more:

And I'm sure there are many more out there...

What to learn more?

Do you want to learn more about four of the most pioneering models from this list? Do you want to know more about the models used by companies like Buurtzorg, Viisi, Haier, and ner? Well, then check out our Corporate Rebels Academy!

Written by Michele Rees-Jones
‘Blame’ is a loaded, negative word. But it’s a common reaction when something goes wrong. Some even look for people to blame. It shifts…
Read more
Jan 25, 2023
The Biggest Threat To Pioneering Firms Are Its Own Leaders
Jan 25, 2023

Written by Joost Minnaar
Last month, I experienced an interesting turn of events. While I was reading a book featuring a story on the awesomeness of Southwest…
Read more
Jan 21, 2023
Decentralization in the Workplace: How Distributed Management is Changing the Game
Jan 21, 2023

Written by Joost Minnaar
For our latest "Bucket List" tour, we traveled all the way to the other side of the world—specifically, Japan. We toured the country for…
Read more
Dec 21, 2022
Make 2023 the Year You Become a Corporate Rebel
Dec 21, 2022