Home Blog Self-Management Is About More Than Reinventing Structures

Self-Management Is About More Than Reinventing Structures

More and more is being written about self-managing and decentralised ways of working, with organisations like Haier and Buurtzorg capturing the attention of management and business thinkers the world over. However, most (if not all) of the focus in these case studies tends to be on structures and processes. Don’t get me wrong, structures and processes are extremely important. But they are not enough if we truly want our organisations to shift. 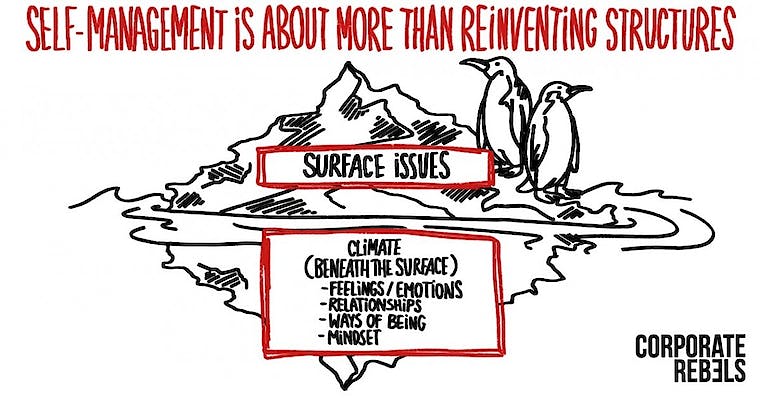 Over the last twenty years, my colleague Karin Tenelius has been coaching organisations to become self-managing. Since her first experiment in 1999 supporting staff at a small Swedish hotel to become fully autonomous, she has tested the idea that it is by coaching each other to have different kinds of dialogues and ways of being together that the real shift happens.

In our experience, focusing only on structures and processes is like rearranging deck chairs on the Titanic. However, if we invest our energy in the less tangible things – mindsets, ways of being, culture, and how we relate to each other – two things happen. The first is that we are able to imagine and co-create structures and processes that we couldn’t have conceived of before, and the second is that whatever system we decide on, it’s less likely to be sabotaged by counterproductive behaviours in our collective blindspot.

At Tuff Leadership Training we have tried to distinguish these phenomena in order to spread these ideas and help make them “trainable”. We have come up with three pillars that we believe make up a foundation for effective self-managing teams and organisations:

A coaching leadership mindset and way of being

Karin likes to say, “If you are the founder, CEO or leader in your team or organisation, you are the biggest obstacle to their success!” Basically, if your colleagues in any way sense that you are still “in charge,” your team will never reach its full potential. This is because how someone relates to you, however unconscious it might be, profoundly influences how you show up. That’s why in the company of some people we can feel clever and funny, and around others we feel totally stupid and dull. Del Close, regarded by many as the godfather of improvisational theatre, said: “Treat others as if they are poets, geniuses and artists, and they will be.”

Treat others as if they are poets, geniuses and artists, and they will be.

Therefore this first pillar is not about “doing coaching” but more about your mindset and way of being. A coaching way of being is both compassionate and tough, one that encourages an adult-to-adult, partnership-style dynamic. It’s about relating to people’s potential, even if it isn’t visible in that precise moment, and at the same time being completely direct and holding them to account.

To develop a coaching leadership mindset and way of being, all of us must unlearn the parent-child paradigm of leadership that we are so often blind to. All of us have been conditioned since childhood to lead in a way that has shades of the parental – either we tend to be overly responsible and critical, showering others with our own solutions and advice; or overly caring, wrapping up everything we say in cotton wool and protecting our team from the harsh reality. This is not our fault, per se – it’s because of the paradigm we are in. To step out of that paradigm is to practice new ways of relating and being, and totally new abilities, like generative listening or asking coaching questions.

So if you are in a leadership role and you’re trying to move towards greater autonomy in your team or organisation, consider that you are totally blind to just how parent-like you are, despite your best intentions. If you operate from that assumption, it will enable you to embody a new sense of humility and curiosity, seeking out feedback from your colleagues about anything you’re doing or being that’s in the way for them to fully step into their new-found authority.

A focus on working climate

The second pillar we’ve found is critical to creating a flourishing self-managing team or organisation is a focus on working climate. Joycelyn Davis describes climate in her book The Art of Quiet Influence:

“Climate is people’s perceptions of the workplace, or what it feels like to work in a place. It is not the same as culture. Climate is malleable and can change quickly, while culture, which is the underlying values and unwritten rules of an organisation, is durable and slow to change. Climate has been shown to affect motivation, performance, and financial results and is, in turn, affected most strongly by managers’ daily actions rather than by anonymous forces such as organisational history, systems, and strategy. Everyone talks about company culture, but company climate is the more powerful tool for improving results.”

In most organisations, there is little to no focus on the working climate. Discussions about team performance tend to be limited to operational, “surface” issues – strategy, process, procedure, tasks and so on. What most of us don’t dare to talk about are the taboo issues, the things beneath the surface. Yet these are so often precisely the things that get in the way for teams to be effective. If we can learn to talk about and shift our working climate, there is enormous energy and creativity to be unlocked.

Here are some tips for focusing on working climate:

A culture of mandate and involvement

As author Chuck Blakeman once told me, it doesn’t work in an organisation to “declare self-management and say: “I’ll be on the golf course” – that’s abdication.” Making the paradigm shift to a more self-managed way of working takes time and practice. Creating and nurturing a culture of mandate and involvement is crucial.

When I say mandate, I’m referring to the given permission or the authority to do something. Again, this isn’t a one-off announcement, so here are two useful habits you can develop, especially as a leader. The first is “getting the mandate”, and the second is “giving the mandate away”.

Getting the mandate means asking for explicit consent before doing something. Choice is perhaps the defining feature of an adult-to-adult way of working and being together – it is only when we have the ability to say “no” to something that “yes” has any meaning. With choice comes ownership and accountability. That’s why Spanish consultancy K2K Emocionando doesn’t go ahead with any transformation processes until the whole company (after visiting other companies and talking to employees who have gone through the process themselves) has voted, and at least 80% must say yes.

It is only when we have the ability to say “no” to something that “yes” has any meaning.

At a micro level, a magical question you can use is: “Is it OK if…?” For example, “Is it OK if I give you some feedback?” In traditional companies, most managers vomit feedback on their employees without ever getting consent. It’s no wonder employees end up in a state of learned helplessness! Another example would be in a meeting, saying something like: “I’d like us to do something differently in this meeting because I think it could help us generate a new way of thinking – would it be OK if I facilitate us through a process for twenty minutes and then we see if it was helpful or not?” When we do this, and get an authentic “yes”, it creates an adult-to-adult dynamic where both parties become co-responsible for the experience.

Giving away the mandate

Giving away the mandate is even more important. If you’re a leader, in any sense of the word, you’ll find that individuals and groups are very skilled at, often unconsciously, nudging the responsibility back to you. This is because we’ve been conditioned in schools and workplaces to defer decision-making and answers to someone “above us”. To help us all unlearn this, we can all become skilled at giving away the mandate.

Some ways of doing this are:

When people feel truly involved and accountable, all sorts of ideas, solutions, systems, and structures are created in service of the team and the level of commitment to making them happen is next-level.

For more on this, check out the book Lisa Gill has recently published: ‘Moose Heads on the Table: Stories About Self-Managing Organisations from Sweden', co-authored with Karin Tenelius.