Home Blog Defining Our Company Values: How We Screwed Up (And Fixed It!)

Defining Our Company Values: How We Screwed Up (And Fixed It!)

Don’t be a d*ck. A ‘cool’ value in modern culture. It’s garish. It turns heads. It even earns a wry smile. But it delivers very little to the organisation or its way of being. What are the behaviours of a d*ck? Who makes a decision on whether an act of dickery has occurred? Is there an underlying tension of psychological safety because you’re holding back – afraid of becoming said d*ck? 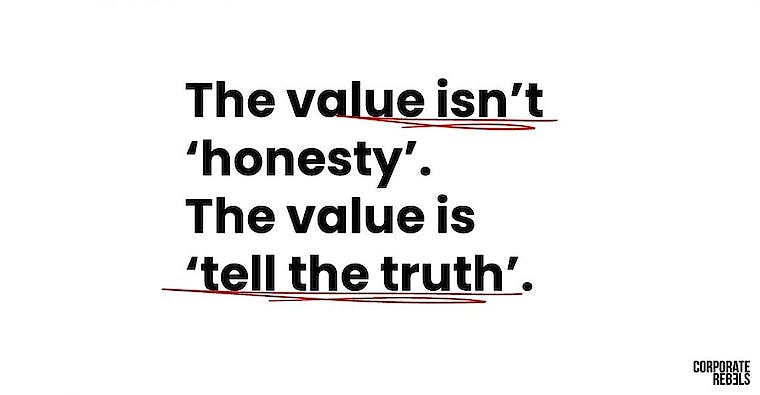 We can throw this onto the proverbial values bonfire, alongside the inept one-worders. Integrity. Honesty. Humility. Teamwork. The list goes on. Noble, but how do you show them in the real world?

Simon Sinek explains that values should be how companies operate when they’re at their natural best – rather than being inspirational.

Paraphrasing the above video, Sinek says that everybody thinks they’re honest, yet everybody tells lies. The value isn’t ‘honesty’. The value is ‘tell the truth’. Likewise, the value isn’t innovation. You can’t execute on innovation, it’s not an instruction. But you can tell people to ‘look at the problem from a different angle’.

If you’ve fallen into the trap of framing your business on a bunch of values that at their heart mean very little, you’re not alone. A quick Google search of [what should my company values be?] produces the results you’d expect.

And research highlights there’s a substantial gap between the employer perception, and how values are received by team members. A few stats to throw into the mix include:

In 2017 we created a new set of values. And like so many others, got them WRONG.

They were rolled out as part of Reddico’s cultural makeover – a crystal ball look into the future of the business. But they were generic. People didn’t remember them. And we didn’t make decisions with values in mind.

In the summer of 2020, we went back to the drawing board. And this time included the team in the process. The following is a basic guide to how we went about it.

All-team discussion on what it meant to work at Reddico. This included a presentation on our current values, where we felt the issues were, and what we wanted to achieve. In smaller groups, teams discussed and fed back on where they felt Reddico’s values should sit, identifying words or phrases that stuck out to them.

Taking this information away, I started to combine similar themes – with the thought process of creating three or four values. This felt like the right number, so they would be easier to remember, think about, and integrate into our day-to-day work life. An important consideration was to keep them relatively simple and easy to understand – rather than long winded and jargon-heavy. At the end of this stage I presented three values to the team as part of the advice process.

In this second discussion the team was split. Some loved the new values and didn’t think any changes were needed. Others felt we could improve one or two areas or focus more on one of our particular strengths. Taking this feedback, I revisited my work and made a couple of tweaks.

The three values were presented (with their behaviours) as final.

If you’re going to run a reinventing values session, don’t stop at the values. Consider the behaviours, and give examples of how someone could demonstrate a particular area. Four or five behaviours per value is a good place to be. You can measure these behaviours in annual performance reviews, probations, 360 feedback, coaching, or whatever other type of system your company has.

If you’re going to run a reinventing values session, don’t stop at the values. Consider the behaviours, and give examples of how someone could demonstrate a particular area.

Once you’ve refined or redefined your values, don’t just stick them up on the wall as a silent overlord of your office. You need to start embedding them into your culture’s practices, policies and decision making. They need to become a light to you in dark places, when all other lights go out (hopefully a few of you get the reference).

Values-based recruitment is a good place to start. After all, you want people who share similar values to yourself. But many businesses try and fail at getting this right. Helen Sanderson talks about deliberate values-based recruitment and you could learn a lot from Helen and Wellbeing Teams’ approach to this.

But, what about the day to day?

Well, by using Sinek’s theory, your values establish what your culture looks like when it’s performing at its best. You might not get things right all the time, but your decisions should reflect your values – because they’re a natural ingredient to your business and its success.

What does that actually look like in practice? Well, Reddico has three values:

Here’s how we’ve made decisions to reflect this over the past 12 months (since these were created).

We start with trust

We have the mindset of believing the best in people, and that our team will do the right thing. We communicate, we collaborate, we do what we say, and we give each other hard, honest feedback.

We support & inspire each other

We’re a team. We support each other and ask for help when we need it. We share our knowledge, inspire, and put others before ourselves.

We take on responsibility

We don’t shirk responsibility, but take ownership and deliver amazing results. We’re responsible for managing ourselves and our growth. We hold ourselves accountable, and learn from mistakes.

Once you’ve refined or redefined your values, don’t just stick them up on the wall as a silent overlord of your office. You need to start embedding them into your culture’s practices, policies and decision making.

Values align people. You can recruit based on values, build a culture from shared values, and make decisions that reflect the values you instil across your business.

But people get values wrong. They opt for dramatic effect, try to tick too many boxes, or chuck them up on the wall and forget all about them. Visibility isn’t important – it’s how you integrate them into day-to-day life and make them an automatic instinct.

This is a guest post from Luke Kyte, Head of Culture at Reddico a company that puts trust and freedom at the heart of everything they do. For more information on Luke and the company, check out his rebel page.

Written by Luke Kyte
I am Head of Culture at Reddico, a company that puts trust and freedom at the heart of everything we do. In 2020 we were named as the 4th best place to work in the UK – following our cultural revolution.
Connect @lukekyte101
Share or join the discussion!
Our newsletter
Are you ready for more revolutionary content?
You can follow us on social media

Written by Ari Weinzweig
One of the most radical of all our approaches at Zingerman’s, we ask everyone in the organization, from the minute they start working with…
Read more
Nov 12, 2022
Emotional Intelligence (EQ) in Leadership for Flat Organizations
Nov 12, 2022

Written by Pim de Morree
The days of the traditional leader are over. (Well, if it were up to us.) Leadership can be much more dynamic than traditional pyramid…
Read more
Oct 15, 2022
The Great Resignation. Quiet Quitting. What The F***?
Oct 15, 2022

Written by Pim de Morree
The Great Resignation was all the hype earlier this year. Then Quiet Quitting took over the headlines when hordes of people popularized…
Read more
Sep 24, 2022
A Four-Day Workweek: It's Better For Everyone
Sep 24, 2022

Written by Joost Minnaar
Are you working your ass off? That's something to be proud of—hard work typically means putting in a lot of hours. At least five days a…
Read more
Sep 03, 2022
A Handbook Of A Self-Managed Organization
Sep 03, 2022

Written by Joost Minnaar
Recently, we visited P4Q and Panefisa in Bilbao to shoot footage for our Academy courses. Some of you may recall how I've already shared…
Read more
Read all articles