Home Blog Is There A Need For New Pay? If So, For Whom?

Is There A Need For New Pay? If So, For Whom?

In German-speaking countries, "New Pay" has been used recently for compensation approaches in agile or self-organising environments. But a study by New Pay Collective and the Pforzheim University shows most of the New Pay ideas can be effective more widely. 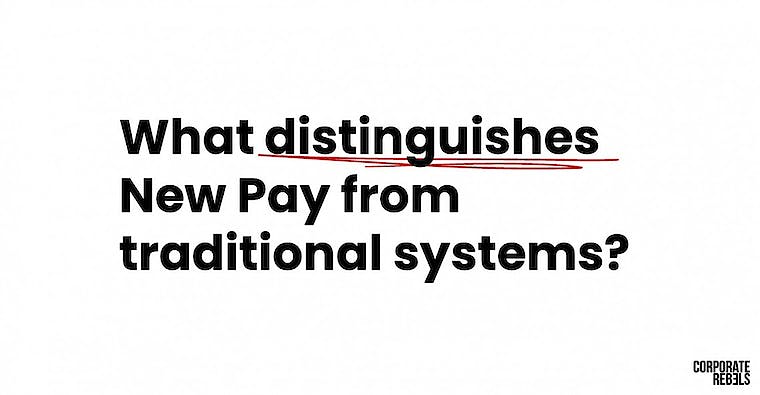 What does it take to promote a working world that serves people and not the other way round? Or, what prevents people from following their convictions and finding their professional passion/calling? One big influence is the way they are paid.

We often don't do things for money but, like it or not, it drives actions. Personal development, motivation, value creation, profitability and sustainability – all are closely related to pay.

Pforzheim University looked closely at these interactions. This was done with the New Pay Collective (a network of people and organisations interested in the development of compensation systems, and new thinking about rewards). Their report summarises the important results of this joint research.

We often don't do things for money but, like it or not, it drives actions. Personal development, motivation, value creation, profitability and sustainability – all are closely related to pay.

How are culture and pay connected?

The report says compensation systems are a reflection of, and an influence on, organisational culture. Therefore, they should not only fit the strategic orientation, but also the culture needed to be successful, because behaviours that are rewarded via pay become dominant.

New Pay builds on classical compensation approaches but develops them further. Take Fairness as an example. In classic systems, it is mostly about assessment and subjective criteria. In New Pay, procedural justice is important as well as distributive justice. This puts more focus on structures and process.

New Pay approaches also expand other dimensions. For example, flexibility is a focus in classic systems. But while benefits can be selected according to individual needs, New Pay also takes into account employee choices on working time, leave and salary. 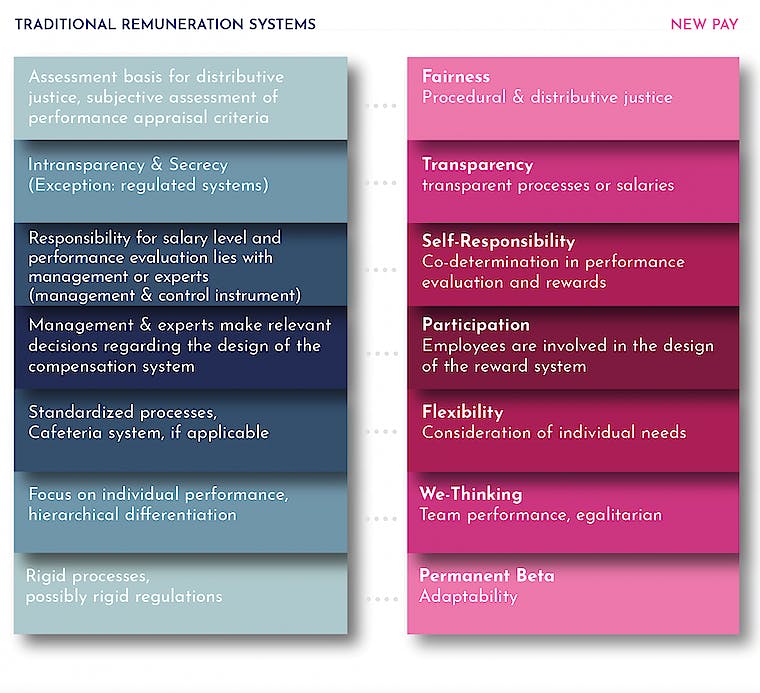 To show the connection between culture and compensation, the New Pay Report uses as a basis the maturity models of "Spiral Dynamics" (according to Beck and Cowan,1996, 2014) and "Reinventing Organizations" (according to Laloux 2014, 2015).

According to these, six of the seven New Pay dimensions are relevant for organisations regardless of cultural maturity. This means all, and not only "rebels", can be effective with “New Pay” rewards. But classic compensation systems are somewhat unsuitable for New Work.

And New Pay fits better for purely performance-oriented companies on five out of seven dimensions. In qualitative interviews, employees desired more team bonuses rather than individual bonuses or profit-sharing. Although performance evaluation is considered fair, it is often perceived as subjective and influenced by political behaviour.

Performance as an aspiration remains vague and employees observe current performance evaluations only represent a part of value creation.

Fairness is more important than participation

According to the survey, employees first want fairness (56.9 per cent), followed by flexibility (46 per cent) and transparency (33.2 per cent). The dimensions of participation (22.8 percent), we-thinking (18.3 percent) and permanent beta (13.9 percent), were selected by fewer respondents. Self-responsibility is the least important (8.9 per cent).

Despite an emphasis on teamwork and collaboration, this aspect is rather uncommon compared to compensation. Taking personal responsibility for one's own salary or that of other employees is attractive to very few respondents. Here, the findings show that small, simply structured new-work companies can best implement self-responsibility.

What does this mean in practice? It’s not advisable to take the weight of the New Pay dimensions in the survey as a guideline for action when changing compensation systems, because it is only a snapshot.

It is striking that employees often chose the dimensions they know from practice and that pay attention to their individual needs - like fairness, flexibility and transparency.

The dimensions Participation, We-Thinking and Permanent Beta, which they find less important, are more directed to the community, the future or functionality. Without being asked to balance organisation and personal needs, employees are likely to choose the personal perspectives.

In summary? More communication around the design of pay systems is needed.

Written by Michele Rees-Jones
‘Blame’ is a loaded, negative word. But it’s a common reaction when something goes wrong. Some even look for people to blame. It shifts…
Read more
Jan 11, 2023
The Corporate Rebels Handbook - How We Handle Fuck-Ups, Meetings, and Compensation
Jan 11, 2023

Written by Pim de Morree
One of the main principles we rely on at Corporate Rebels is radical transparency. And what better way to live up to that than to share our…
Read more
Nov 30, 2022
Should You Let Employees Set Their Own Salary?
Nov 30, 2022

Written by Joost Minnaar
When this year started, your salary was probably worth more than it is now. Although you’re still making the same amount of money, it’s…
Read more
Oct 22, 2022
Organizing Based On Algorithms And Smart Contracts
Oct 22, 2022

Written by Alex Hirst
Conversations between ‘Corporate Rebels’ like us inevitably end up taking the same line of personal enquiry. What was it that made you…
Read more
Sep 21, 2022
Why You Should Separate Salary And Performance
Sep 21, 2022

Written by Marc-Peter Pijper
We all believe a great school report deserves a tenner, right? Well, I disagree. Here's why I believe that. And how that translates to…
Read more
Read all articles