Home Blog Stop Being A Manager: Start Being A Leader

Stop Being A Manager: Start Being A Leader 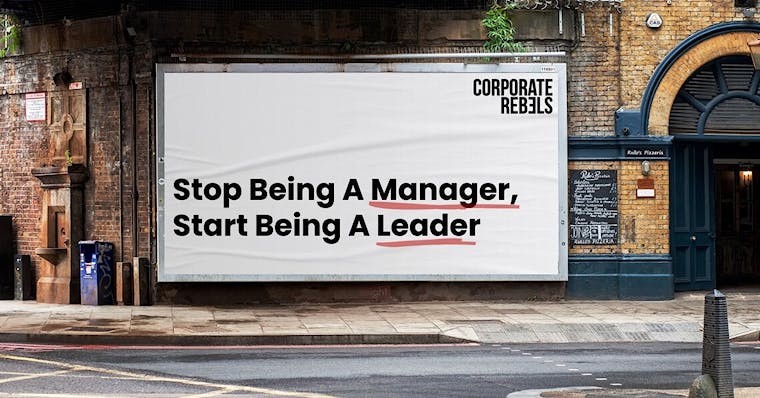 But it's hard to create such a culture. It goes way beyond sending a bunch of managers to a training program. To a large extent, it's about leaders walking the talk. It's about leading by example.

One of the most progressive organizations we've visited is the Belgian Ministry of Social Security in Brussels, Belgium. Yes, that's right. A government organization. In Belgium.

During our visits we saw obvious signs this was a progressive workplace. Their way of working is based on high levels of freedom and trust (people are free to work where, when, and how many hours they want). There's a strong focus on continuous experimentation (all staff have 10% experimentation time), and they've moved a big part of their organization to self-management.

When we met the former head of this government department - Frank van Massenhove - we also got insight into his exemplary supportive leadership style. While it's impossible to summarize such a style, we do believe there's value in sharing some examples. So, here we go.

Every other week, Frank would invite 16 employees to join him in conversation. What are your frustrations? What can we do better? How we can create a better workplace?

Questions like these helped Frank to understand the perspectives of the civil servants. He gained important insights into their feelings, frustrations, and hopes.

Regularly, Frank shared his thoughts by writing blog posts. Frank: "I wrote about what was on my mind, but also about the biggest mistakes I made. Blogging on a regular basis helped me to create transparency and a safe environment. If people knew that I was sharing my mistakes, it helped them to be more willing to try new things. Without such psychological safety, we would have never been able to transform the way we did."

Like many progressive leaders we've interviewed, Frank refrained as much as possible from making decisions. "It's the people with expertise who should make decisions. They are the ones who know best."

The result? According to Frank, he did not make a single decision in his last three years leading the ministry. A good leader shouldn't make decisions. He or she should guard the culture.

Another important aspect of Frank's leadership is how he handles criticism and blame. For example, whenever someone from outside the organization (mostly politicians) tried to interfere in the organization.

One of the most progressive organizations we've visited is the Belgian Ministry of Social Security in Brussels, Belgium. Yes, that's right. A government organization. In Belgium.

On the other hand, when you get praise you need to pass that on to the people. Frank: "When we won prizes or awards I never went on stage unless it was a personal prize. Organizational awards were always picked up by our staff."

Stay away from meetings

Frank: "Leaders should stay away from meetings as much as possible. We've seen that if leaders go to meetings, they stifle innovation."

The leaders make the hiring and firing decisions. They can take away another's status. Frank: "That's why they have to stay away from meetings. If they're there, people will be scared to come up with courageous ideas."

How Frank walks the talk on supportive leadership is not only inspirational, it's also highly aligned with other leaders we've met. That they listen to staff, share their thoughts, create freedom, get out of the way, and guard the culture is typical for such progressive leaders.

The staff we interviewed put a huge amount of trust in Frank. They explicitly mentioned the above approaches and how his leadership helped them to be courageous, to take more decisions, and to develop their talents.

Stop Being A Manager: Start Being A Leader

Many erroneously believe that organizations with less hierarchy also experience less leadership. We've seen it's mostly the exact opposite. When functional hierarchy is reduced, natural leadership must arise—leadership based on support, humility, and guarding the culture.

It's about stepping down as a manager, and stepping up as a leader.